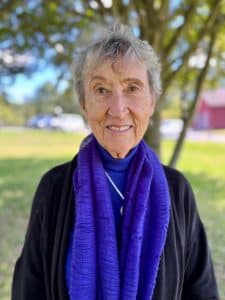 Phyllis Beauvais, co-founder of Wellspring, a residential program on a small, bucolic farm in northwest Connecticut.

Human beings evolved to be more in tune with the natural world and are built for more physical labor, than what most of us experience today. Could an increase in exercise and exposure to plants, animals, and green space, help us to be more aligned with our most basic humanity and more physically and mentally healthy?

Working from this premise in 1977, young, married psychologists Richard and Phyllis Beauvais, developed a residential program on a small, bucolic farm in northwest Connecticut.

Having worked together at another school, the pair’s idea was to offer a non-institutional and home-like space where patients could work on healing while also chipping in around the farm and getting their hands a bit dirty.

Beyond the staff and patients, the farm has housed goats, sheep, chickens, cows, cats, dogs, and a popular rabbit named Willow.

After Richard’s death in 2019, Phyllis carried on their mission and now, at age 87, hopes to see it continue to grow and thrive as she steps back to a more supervisory position. Speaking with New England Psychologist’s Catherine Robertson-Souter, Beauvais spoke about the journey she and Richard started together 45 years ago and how she hopes their dream will be carried into the future under the next generation of leadership.

Q: You and Richard had both been treating patients at another residential center that had an outdoor and animal care component. Why did you decide to start your own program?

At a certain point, we had a sense that we wanted to, not just address the behavioral issues, but what was underneath that. If we could get the pathology out of the way, how would they begin to flourish and come into being more truly themselves? The concept of the inner child was just getting started at the time, and it was about recognizing that the inner child in each person maybe needs some redo on some of the parenting. We are called to be unique and amazing and maybe something in our early childhood or in our genealogy got in the way.

We were considering pathology as a substitute behavior for when a person doesn’t get what they really need and they go after it in other ways. So, how do we get down to what the real need is and confront the substitute behaviors but also begin to meet those needs so that the person can flourish? 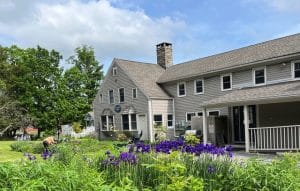 These are ideas we hear a lot about now, of treating a person more holistically. Was this a prevalent thought back in the 70s?

Well, I had been not been paying attention to what other people were doing in psychology other than that when patients were coming to us, something seemed to click. I had come out of a background of poetry and theatre and meditation and I had looked into a lot of spiritual traditions. It was there I found that idea of, ‘Who is this person really?’ rather than ‘What are the behaviors?’ What is that when we drop down into a quieter place, into a deeper place in ourselves? What is it that then begins to evolve?

I don’t think it is because other people were not knowing this; people have known this forever. Sometimes we lose sight of that as we get into a world that is maybe headier and more electronic and inside.

Is this also where the connection with nature came from?

I grew up in Nebraska so on both sides my people were farmers, people of the land. I knew what that could do for a person to actually work with the earth. People who have difficulties are in some ways not in touch with their bodies. When we actually engage with the earth, something happens to us: as we heal the land, the land heals us. And with animals, we can build a relationship with them as something outside of ourselves that is not as complicated.

How do the students react to working with animals?

People come in many different sizes and shapes. Some have an immediate affinity. We had a girl come recently who was school phobic, could not go into school, but when she came to be with the animals first, she could more easily make that transition. Something in her trusted something in the animals. Other people say, ‘I don’t want to get dirty. I’m scared of them,’ but little by little something begins to happen.

Wellspring is a place of immersion in a healthier experience and a place where it is safe to really drop down into those places where maybe there are wounds and scars and terrors and maybe rewrite the story.

The things people are doing now, like adventure or wilderness programs, are great. When you have not experienced these kinds of things, you might have an opinion about what you like but when you physically have experienced it, it changes you in your body.

Some of these kids from the 70s would be in their 50s and 60s now. Have you kept in touch?

There are some amazing people out there who have been with us, occupational therapists, nurses, and lawyers and many, many things. We have board members whose children were here and another who was here herself.

I was just talking this morning with a former student who is now an amazing artist. She and her husband are starting a charitable foundation.

Another former student’s father just got in touch with us to let us know his daughter is married and doing well as a teacher. He said, “I just want to let you know, she wouldn’t be alive if it wasn’t for your work with her.”

What have you learned in going through this 45-year process and what changed over time?

I learned it is a lot harder to start and sustain something than we thought. We started very small and, within seven years, we had gone from being a mom-and-pop operation to being accredited by the Joint Commission on Accreditation of Healthcare Organizations, the smallest facility in the world at the time to get that accreditation. We had to meet all the gazillion standards hospitals do. The challenge was how to meet the standards but not stifle what it is you do.

The growth was pretty organic. It always felt like we were flying by the seat of our pants and yet somehow it would work out. We have never been rich but we do have a small endowment now and hopefully that will build to keep making it possible to sustain it all.

What would you say are your future goals for the program?

I am semi-retired now although still doing Zoom supervisions. When I am not there all the time, it is an experiment: can this keep going? Will the spirit still be there when we are not there in body?

For the program, we certainly have fundraising goals to be able to pay our staff more. But really, the goals are about staying true to the mission and meeting each person that comes in, including staff, where they are to see if we can help them to become free to be who they are deep down. If we can stay true to that mission and the program can thrive, I don’t need any more than that.