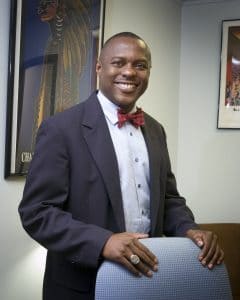 Under the leadership of current president Martin Pierre, Ph.D, the Massachusetts Psychological Association has taken major strides towards its goal of being more open and inclusive and becoming a force for anti-racism within the field.

As the first Black man to lead the group in its 81 years of existence, Pierre’s work during his tenure to increase diversity in membership and the recognition of diversity, equity and inclusion (DEI) issues earned the association the 2021 American Psychological Association’s Diversity Award.

Pierre’s MPA has worked to examine much of what they do through an anti-racism lens, from combing through all policies and bylaws, to re-writing the language on its website, to bringing in speakers, hosting CE trainings, offering community presentations, setting up mentoring programs and more.

With a newly formed DEI task force, Early Career Psychologist committee, White Ally Group, and a BIPOC graduate student support group, the MPA has expanded its efforts to create a more welcoming space for everyone.

As Pierre wraps up the last four months of his two-year tenure, he spoke with New England Psychologist’s Catherine Robertson Souter about why he chose to step into the role, and the projects, programs, and positions that he has helped to create, those of which he is most proud and the areas where the MPA still needs improvement.

What would you say are the key accomplishments of your tenure thus far?

Well, during my tenure, we have made significant strides by infusing equity, diversity, and inclusion into the very fabric of the organization. We are incorporating DEI issues into board meetings as well as hiring a consultant who is tasked at engaging the membership from a top-down approach.

At MPA, we have continuing education workshops that address diversity and, because we want to infuse DEI into the very fabric of the presentation, we provided presenters a template that would instruct them how to utilize an antiracist lens and how to address how their topic of interest is relevant to historically marginalized folks. During our 2021 conference, we were intentional in inviting speakers from diverse backgrounds. What it has done is open up some rich conversation around gender, around race, around ethnicity, around spirituality, and around intersecting identities.

How have you addressed the goal of increasing diversity among membership?

MPA has been intentional about attempting to create a pipeline by engaging graduate students. One of my presidential initiatives was to develop a graduate student of color support group called the Committee for Ethnic Minority Affairs and to engage in mentoring relationships with students in high school as well as undergraduate programs. It is important to get these students involved at an early age.

The other thing we have been doing is to create mentoring relationships among MPA membership, not just for graduate students but with early career psychologists.

We also have solicited support from the community action partnership team, a consultant initiative by Harvard Business School and the Kennedy School. What we are hoping to leverage from them is to help us retain and attract more BIPOC psychologists.

For instance, we were awarded the APA diversity award, so we are looking at how we could leverage that in order to create marketing and various kinds of diversity resources that would attract members from historically underserved groups.

This has real life implications in both engaging the public and in providing psychological services for underserved populations.

Particularly during the pandemic, which I call the triple threat, the demands of receiving psychological services, particularly for BIPOC folks, have increased dramatically. However, there is a dearth of psychologists to meet the needs of this population so it is important for us to create that pipeline.

There has been a lot of talk about connecting people with therapists with similar cultural or racial backgrounds. Why is this important?

Is the MPA also working to increase cultural awareness across the board for cases where a patient does not have access to someone from a similar background or where they choose a therapist with different background?

Yes. For example, we have the White Ally group: they meet weekly to address how whiteness has continued to create systemic oppression for Black and brown people.

One way of increasing the diverse needs of the population is for white psychologists to develop a sense of humility by exploring their own racial identity and by creating their own anti-racist plan. We want people to ask themselves how they can do better and how they can push people and institutions to do better so they can become better practitioners.

How has the feedback been?

The feedback is overwhelmingly positive. Board members and association members have commented how culturally diverse and inclusive the association has become. Graduate students who often didn’t have a place to share some of their concerns regarding DEI or implicit bias or micro-aggressions have found a place where they can gather together and support and affirm each other. The result is to increase their sense of agency and feeling hopeful about their own futures as professional psychologists.

What future goals do you leave behind for next president?

We have a DEI task force that has made recommendations. One is to hire a DEI specialist; another is to create a cultural assessment and to review the MPA bylaws and policies through an anti-racist lens.

We also have a diversity board seat which is something I will continue to support. Diversity is defined in a broad sense, not just racial and ethnic identity but it could be age, sexual orientation, sex and gender identity, physical ability, linguistic or religion as well.

This had not been the case previously and so it is really opening up some meaningful dialogue and exposing the association to issues around inclusion as well as diversity.

You have talked about your own journey to becoming president. What was it was like coming in to MPA and not feeling welcomed or included? What made you stay with the group?

I remember attending an MPA conference and I was the only person of color in the room, sitting at a table. No one greeted me or approached me or asked who I was or, “Why are you here?” I felt a sense of invisibility. I felt as if someone invited me into their home but then did not make me feel welcome.

I had reservations in joining the board because, as a Black male, we occupy a certain space in the psyche of America, the negative stereotypes that are often associated with being Black as well as with being male.

Historically, in film, in literature, we are portrayed as villains, as con men, as drug dealers, as deviants, as hyper sexual, as thugs, as predators. I knew that the weight of racism and white supremacy coupled with the daily indignities that people of color have experienced in this country could have a deleterious effect on me in being the first Black president of the MPA. I wasn’t sure I wanted to carry that burden.

But then I thought of Barack Obama and that if he hadn’t run for President that year, if he were to put it off, he probably would not have been President today.

I said to myself that I need for other psychologists of color to recognize their own human possibility by seeing a reflection of what they can accomplish. It was a risk that I had to take, being the first Black male president, and it could be a daunting task but I knew I wanted to change the narrative. I wanted to make other people feel welcome, to make the association more inclusive so everyone could benefit from it.

In the end, all of this is so we can be stronger and more intentional, so we can address the issues that are currently facing this nation, issues around equity, around systemic oppression, around parity, around the stigma associated with mental health.

I think the association could be in a position to address these issues and to live out the mission of advancing psychology as a science as a professional and as a means of promoting human welfare.

One Response to MPA president strives to increase diversity in membership