Head of the Landmark School reflects on 51-year tenure 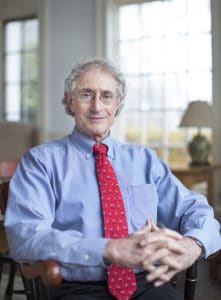 Not many people spend their entire careers working for only one organization. Half a century is a long time to stay in one place but when the work itself rises above day-to-day responsibilities to the level of a mission, 51 years may seem not nearly enough.

As he announces his retirement and looks forward to continuing that mission, Robert J. Broudo, M.Ed, head of the Landmark School in Beverly, spoke with New England Psychologist’s Catherine Robertson-Souter. He looks back on how the school has grown and how his own path turned out so differently from what he expected.

When first asked, by school founder Charles Drake, Ed.D., in 1971 to join his team, Broudo balked at the idea of staying in his hometown of Beverly. He was already planning to work with children and in education but thought he would go a bit farther from home.

He agreed to help set up the school, left for graduate school and a stint in Israel starting a special education program at the American International School. Then, he returned to Landmark and remained there, moving up to become president and headmaster in 1990.

Landmark specializes in evidence- and research-based teaching for students with dyslexia and other language-based learning disabilities.

You have basically been involved with Landmark since its founding. What have you seen change in 51 years to take the school to where it is today?

I had met Dr. Drake when I was in college studying developmental psychology and I was working in Maine with underprivileged kids. He taught us about this thing called dyslexia and none of us knew what it was. He taught us from day one about neurology and how kids learn.

That summer of ’71, we were coming down weekends to this old estate in Beverly, painting walls, collecting furniture, and setting it up to be a school. We opened with 42 students in September of 1971 with a first year’s budget of $225,000 and we had bought the campus for about $225,000.

Today, we have $75 million in assets, a $36 million operating budget, 36 buildings and 470 students from 20 states, four countries, and 115 cities and towns in Massachusetts.

It has grown. However, the primary one-to-one tutorial, diagnostic, prescriptive, customized, individualized, remedial model has never changed. We use small classes based on skill level. Academic advisors oversee each student’s learning profile and we do not subscribe to any one methodology.

We have learned new science over the years from new research, so we are able to take the neuroscience plus our years of experience about what works and doesn’t work and apply that to our curriculum. The curriculum can grow based on what we are learning but the basic model of meeting every student where they are as an individual and as a learner has not changed.

In the early 90s, the school was in a pretty significant financial challenge and, in order to right the ship, a group of us came together and we problem-solved how to maintain this model and the faculty and staff and keep them whole.
Since 1994 or so, even with downturns in the economy, we have been on very solid financial grounding. Our budgets are positive every year, we have grown every year. Fundraising is taking off. I am proud that we have never let go of our mission even in difficult times.

You speak a lot about the mission of the school. What does that mean to you?

I now refer to Landmark as a mission with a school rather than the other way around. We do outreach and training programs with around 10,000 teachers a year. We are in 60 school buildings doing consulting and we have a summer institute and online programs with Southern New Hampshire University.

Our goal is to help classroom teachers everywhere understand how to integrate language and learning skills into the classroom to meet the needs of students.

I say we are a mission with a school because it is those kids who can’t get to Landmark whom we really want to reach. My biggest goal is to put Landmark out of business. Why should a student have come from England, from India, from Houston or even from New Hampshire, to graduate and go and be successful? Why should that have to happen? We should be able to educate these kids wherever they are.

Since the 70s, there have been leaps and bounds forward in our understanding of learning differences. What have you seen change in the wider world during the past 51 years?

In the general population, there is much more awareness that not everyone learns the same way. I don’t believe we are doing enough to help potential classroom teachers understand the broad neurodiversity in the classroom, though.

In many states, teachers are still teaching curriculum content and curriculum frameworks leading to a high stakes test and they are not necessarily doing problem solving of what are the strengths and challenges of the learners.

Parents are more aware of how to advocate for their children, I think.

Yes, that is true. One of the things about Landmark is that since the 1970s, we have been approved by the Massachusetts Department of Education so 52 percent of our kids are funded by the district they came from. And that is a parent effort. The parent will go and fight the district. It means a lot of kids can come to Landmark who otherwise would not be able to come here.

What are you most proud of in the 51 years?

That’s a hard one because I get emotional. What I am most proud of is that we have never lost sight of our mission. It is all about the kids and if anything brought that out it was COVID. What this faculty and staff has done to take care of these kids, knowing that remote learning is not the best thing for a kid with learning disabilities–they have gone above and beyond.

It is when I see the young kids jumping out of their cars in the morning, with backpacks that are bigger than they are, and they are happy to be in school. And the older kids walking up and down the hill, laughing and talking to each other and happy to be in school, that is what it is all about.

I am involved in some national groups and will stay involved with Landmark. There are other organizations I am on the board of so I will have some time with them as well. I know I won’t be bored.

I won’t miss the daily responsibility of running the operation. I will miss seeing the kids every day, though.