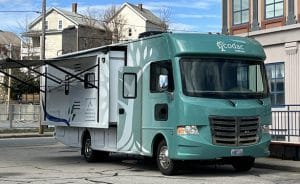 The mobile unit is the first in the nation to be approved under the new DEA regulations and features a dispensary, examination/treatment room, counseling room, waiting area, restroom, and fully equipped security system.

CODAC Behavioral Healthcare is revolutionizing patient care with its mobile medical unit, epitomizing the definition of meeting people where they are.

“We address all the issues, geographic and also demographic issues that have to do with mental health,” said CODAC President/CEO Linda Hurley, LCDCS. “Stigma, racist infrastructure, all those access issues that prevent good care for folks are also addressed by providing mobile treatment that goes to where people live.”

CODAC, the oldest and largest nonprofit outpatient provider for opioid treatment in Rhode Island, launched a mobile medical unit in a state-owned van just weeks before the pandemic hit in 2020.

“We were just getting moving and communities used to the idea of mobile care and then COVID hit, and it was re-deployed,” said Hurley. “Testing, vaccines, it did a lot of good things.”

The following year The Champlin Foundation awarded CODAC a grant to purchase a 27-foot-long state- of-the art mobile medical unit, which was built by Mission Medical Mobile in North Carolina. 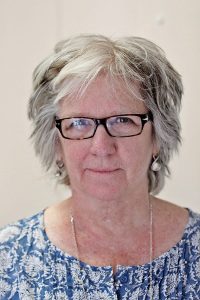 “They did a beautiful job and they worked quite quickly” Hurley said.

When they received word about the DEA approving new regulations that went into effect on July 28, 2021, which would enable them to dispense methadone along with the other two FDA-approved medications for opioid use disorder (OUD) as part of full Medication-Assisted Treatment (MAT), she said they told them, “Don’t even bring it up here.”

“We need a dispensary and we need safe built to meet DEA requirements for methadone, which has the strictest criteria and took four months to build,” Hurley recalled. “We have to be able to use telehealth so nurses can do audio and video with people. We had to test IT capabilities and really have to pay attention to HIPAA. All of our encryption has to work right. It is not a small undertaking. There are a lot of pieces.”

The mobile unit is the first in the nation to be approved under the new DEA regulations and features a dispensary, examination/treatment room, counseling room, waiting area, restroom, and fully equipped security system.

Health care providers can deliver MAT services including counseling via telehealth and in-person dispensing of methadone as well as a treatment with buprenorphine and naltrexone. Other on-site services include, but are not limited to, blood pressure screenings, glucose readings, and mental health screenings.

The unit has been on the road since January and on June 22, officially received DEA approval. Hurley, who has been with CODAC for 33 years and has credentials in psychotherapy, said they have been doing outreach assessments, referring people, getting people transported, and working with those struggling with substance abuse disorders.

“We carry all medicines for opioid use disorder, do wound care…Whatever people need we are addressing,” she said. “Of course, we can’t do surgery, but we will get people where they need to be quickly. It is such a bang for the buck at under $400,000 as opposed to $4 million for a brick-and-mortar facility, which is a low figure.”

According to the state Department of Health, deaths from accidental drug overdoses in Rhode Island in 2021 were higher than for any other year on record and recently passed the benchmark of 100,000 deaths nationally in a 12-month reporting period.

Hurley said a subcommittee of the Governor’s overdose prevention taskforce “looks at hotspots weekly and increases in overdose.”

“Consistently, Woonsocket has been high and has the highest number of people without homes; there are always two encampments,” she said.

When Community Care Alliance asked them to park there Monday through Saturday from 5:30 to 10 a.m., Hurley said they didn’t hesitate to say yes. During those hours the “dispensary is open, individuals are coming into the unit and getting their medicine and receiving other things, protein bars, water… People are always donating clothing. There are always extra people on the unit who go out and do street outreach. It really is wonderful.”

She added they have “been really active since the end of July,” averaging several people a week utilizing the mobile medical unit and she believes “we are really going to pick up.”

“I have opened 10 facilities. I know how it goes,” Hurley said.

She is hoping to raise enough cash to get more mobile medical units going and focus care in other underserved communities in the state.

“I am really excited to talk to anyone about this because Rhode Island needs two more. It is all evidence-based and it works.”