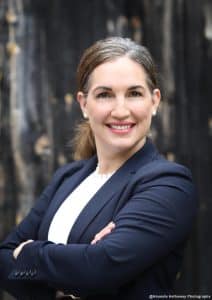 Earlier this year, Massachusetts legislators proposed two maternal mental health bills known as H.4740 and H.4741. The bills were passed by the House and sent to the Senate for further study.

The latter would affect not only mental and behavioral health, but substance abuse issues and even psychosis for pregnant and postpartum women.

In May, the Health and Human Services Department started a hotline for maternal mental health, part of the Biden administration’s efforts to address the issue. Mothers can call or text 1-833-9-HELP4MOMS and be connected to a counselor at no charge and may be given a referral to follow up with another professional if necessary.

“Mental health is the number one complication of pregnancy and postpartum. And yet, it’s all temporary, treatable and preventable. The more we talk about it, the more we destigmatize it.” --Rep. Jamie Belsito (D-4th Essex District)

In a government press release, Health Resources and Services Administrator Carole Johnson lauded the initiative, adding, “We’re going to continue to grow our investments in this resource, as we know it’s what women need.”

The Supreme Court’s recent decision to overturn Roe v. Wade which protected women’s abortion rights may have quite the ripple effect on women’s mental health.

Mass. Senator Joan Lovely (D-2nd Essex District), who is chair of the Massachusetts Caucus of Women Legislators and the Commission on Postpartum Depression, has been vocal on maternal mental health.

She called the Supreme Court decision “a direct affront to women’s reproductive rights and bodily autonomy,” saying it would have “devastating effects,” on women’s mental health. Lovely also mentioned that individuals and families of color would be disproportionately impacted.

All of these issues are also something Representative Jamie Belsito (D-4th Essex District) takes seriously, and for personal reasons. She said she experienced postpartum depression with suicidal ideation and obsessive-compulsive disorder coupled with intrusive thoughts. She wanted help but there wasn’t any.

“I was hanging on by a string and I couldn’t find any services,” she said. “Everyone was so focused on the baby. The baby was great, but I wasn’t doing well.”

Attention is usually focused on a new baby and mothers are sometimes lacking the support they need. Belsito hopes these bills bring about change.

“I feel like we have to triage a severed artery,” she said. “But if we just nipped these issues in the bud to catch these problems early, we wouldn’t have to triage. If we gave people the resources they need from the get-go, people would be in a much healthier space.”

Belsito has been championing this issue for several years. With the help of local women’s health organizations and her colleague Sen. Lovely, with whom she has worked closely on the House bills, she launched the first advocacy day for maternal mental health and family support services at the statehouse in 2015.

The following year, she organized the first family-led national advocacy day for maternal mental wellness and founded the only national organization dedicated to advocating for better maternal health policies.

She was appointed to the Ellen Story Postpartum Commission, a legislative committee that researches and reports on policy initiatives to address postpartum depression.

She founded the non-profit organization Maternal Mental Health Leadership Alliance in 2018 and sat as its policy director until her election to Congress last year.

“Mental health is the number one complication of pregnancy and postpartum. And yet, it’s all temporary, treatable and preventable,” she said. “The more we talk about it, the more we destigmatize it.”

For some women, the onset of labor and delivery means having to drive two to three hours to get to a hospital because the nearby birth center has shut down. One example is the North Shore Birth Center run by Beverly Hospital.

It is staffed by midwives and is the only free-standing birth center in eastern Massachusetts. Because of a staff shortage, the facility is expected to close in September after 42 years in operation.

In mid-June, community members—including Sen. Lovely and Rep. Belsito—protested the closing, which would disproportionately affect low-income residents and women of color. As Belsito noted, “So where does one go to give birth—only Springfield, Worcester or Boston?”

Belsito said there’s a chance the maternal health bills may not pass, but the upside is that they start a serious conversation about women’s mental health before and after pregnancy. She said it’s the first step to an important end goal.

“One of the most important things we can do is elect women into office,” she said. “No offense to men, but we’re the only one who experience everything we’ve just talked about.”