Mass Shooting and mental illness: Is there really a link? 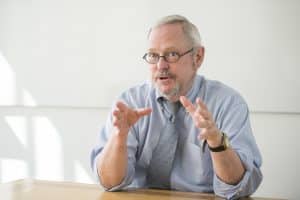 Mass shootings happen in this country with alarming regularity. When they happen, there is often an instantaneous blame for the event on mental illness—not easy access to firearms or stalled gun legislation. We frequently hear that it’s not guns that kill people, it’s people who kill people–and all those people are mentally ill. But is that the real problem?

The day after the Uvalde, Texas shooting at Robb Elementary School, the National Alliance on Mental Illness issued a press release in which the organization made it clear how dangerous it is to automatically link the two.

After calling it “incorrect and harmful,” to link gun violence and mental illness, it said:
“Pointing to mental illness doesn’t get us closer as a nation to solving the problem and doing so leads to discrimination and stigma against those with mental illness — who are more likely to be victims of violence than perpetrators.

The release pointed out that people across the globe live with mental illness, but only the U.S. has an abundance of mass shootings.

“It could be political or religious extremism furthering an ideological agenda. It could be a deeply aggrieved employee. It can be paranoia and other psychotic things but there is a combination of characteristics. “ -- Robert Kinscherff, Ph.D, JD, executive director, Center for Law, Brain & Behavior, Mass General Hospital

Elizabeth Sinclair Hancq, MPH, is the director of research at the Treatment Advocacy Center in Washington D.C. and is based out of Philadelphia. Her nonprofit organization focuses on eliminating barriers to the timely and effective treatment of severe mental illness and it promotes laws, policies and practices for the delivery of psychiatric care.

She said the public perception tends to be that everyone with mental illness is violent. While some types of mental illness are susceptible to violence when they are not receiving treatment, (i.e., schizophrenia), there are medications proven effective in reducing violent behavior. So, are people with mentally illness the victims or perpetrators? Essentially, both are true.

“You are more likely to be a victim and you have an increased risk of being a perpetrator if you have a severe mental illness,” she said. “That’s often missed when talking about violence. People with severe mental illness are typically victimized because they are vulnerable and susceptible to it, especially through homelessness or coming in and out of the justice system.”

The Columbia Mass Murder Database, the largest catalog of mass shootings and mass murder in the world, has approximately 1,800 entries including any mass shooting or murder between 1900 and 2019 worldwide–resulting in at least three deaths, not including the perpetrator.

The stated opinion was: “The major findings from our database are that the vast majority of mass shootings and mass murder are committed by people without mental illness and certainly not psychotic illness and when people with severe mental illness commit a mass murder, they’re much less likely to use firearms than other methods, such as arson or knives.”

A May 31 Psychiatric Times article pointed out what factors specifically incite a mass shooter. Ideology, racism, and perceived injustice trump mental illness in many of these cases.

Take, for example, the shooting at the supermarket in Buffalo this year. An 18-year-old white man purposely gunned down Black shoppers. In 2018, the shooter murdered elderly Jews worshipping at the Tree of Life Synagogue. The 2016 Pulse nightclub shooting in Orlando targeted the LGBTQ community. In each of these cases, it was a hate crime and not mental illness.

Robert Kinscherff, Ph.D, JD, executive director at the Center for Law, Brain & Behavior, concurred that mass shootings and mental illness don’t go hand in hand. He agreed with Hancq that people with mental illnesses are more likely to become victims rather than perpetrators. But he also echoed the point that there are a number of things that can motivate a mass shooter.

“It could be political or religious extremism furthering an ideological agenda,” he said. “It could be a deeply aggrieved employee. It can be paranoia and other psychotic things but there is a combination of characteristics. “

Kinscherff gave a profile of most mass shooters: male, white and in their 20s. The attacks are premeditated and about half the time, they signaled their intention to others. They commonly perceive themselves to be victims. They are acting in their own minds as defenders of groups with which they identify. Some have narcissistic personality features, but they may not rise to the level of mentally ill. They have toxic ruminations, the need for revenge, mixed with hopelessness in their own lives which he said may be an indicator of depression.

To the point that guns don’t kill people, he said yes, people kill people. But the common denominator is the presence of guns. There are more guns than there are human beings and they are readily available and not regulated to the degree of other things.

He used the example that when there were car accidents, cars were made safer with seat belts and airbags. Technology could be used to make guns safer but isn’t. And gun violence doesn’t just take place in mass shootings.

“Gun homicide is the leading cause of death for Blacks in impoverished areas. Women are shot by their partners in domestic disputes,” he said. “There’s one danger here. Even if we got rid of all mass attacks, that’s still only one percent of the problem.”

Kinscherff noted there’s a better way to handle this issue: train people how to use threat assessment models. He said pay close attention to grievance, evidence of planning an attack, leaking information about that attack to others as in texts, tweets and other social media, as well as access to and practice with weapons. Answering the question “how dangerous is this person?” may help eliminate some of the worst violence experienced in this country to date.