Teens’ investment in selfies linked to symptoms of depression 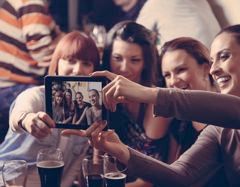 While many parents worry their teens post too many selfies on social media, a new study says the frequency of sharing these photos is less important than how invested the teens are in how the selfies look and whether the selfies got positive feedback from followers.

“I feel like the narrative around posting selfies is very negative,” says Jacqueline Nesi, Ph.D, of Brown University, the lead author of the study, which was published in “Psychology of Popular Media.”

“The idea of posting too many selfies often gets pathologized. However, from my work with teens, it was clear to me that posting a high number of selfies can be normative and isn’t necessarily the sign of a problem,” she said. “What I wanted to understand was when this behavior does become a problem are there certain specific behaviors or thoughts that come up for teens related to selfie posting that might indicate risk for negative psychosocial health?”

For the study, researchers surveyed 638 11th and 12th grade students from rural, lower-middle class high schools in the southeastern United States. More than half, 53.5 percent, were female, with 45.8 percent male, and .6 percent other gender identities.

They asked students how often they post selfies on social media, whether they used photo editing apps or filters, and whether they ask their friends to comment on the selfies.

The researchers then followed 245 of the students on Instagram for three months to observe their selfie posting habits.

“However, two particular selfie-related experiences were associated with negative outcomes, especially for girls. Specifically, both girls and boys who were more invested in their appearance in selfies — going to greater lengths to maximize their attractiveness — reported higher levels of depressive symptoms. And girls who were more concerned about the feedback they got from their peers on their selfies, such as likes or comments, reported more negative feelings about their bodies.”

In terms of attitudes about peer feedback, roughly 30 percent of girls and 25 percent of boys reported that it is important to them that others like or comment on their photos.

“These findings suggest that when we are trying to help teens use social media in healthier ways, we should be less focused on the frequency that they’re posting selfies and more focused on how they feel when they post,” Nesi concluded.