School psychologists: In a class of their own 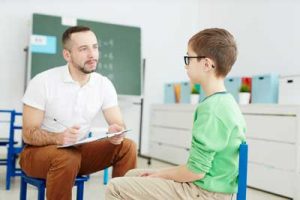 According to the American Psychological Association (APA), school psychology has “…evolved as a specialty area with core knowledge rooted in psychology and education.”

Chafouleas is a Board of Trustees Distinguished Professor in the department of educational psychology, Neag School of Education. She is also co-director of the Collaboratory on School and Child Health at the University of Connecticut.

The National Association of School Psychologists (NASP) offers a master’s specialist program that certifies the psychologist to work as an employee in a school system.

“This is not just a psychologist in a school. It’s a specialty couched within an academic and emotional arena.” --Portland, Maine-based Jane Boulas, Psy.D, NCSP

The APA-accredited doctoral program takes certification one step further, allowing the psychologist to work in private practice, in a hospital or other setting as well as in a school.

But they now have an increased understanding and awareness of other responsibilities that includes helping students and families access health and community services.

Chafouleas emphasized that school psychologists must be cognizant that they do not have direct influence on students.

“You live in a system of family and school. A lot of the work we do is with adults who work with kids,” she said. “That’s the paradox of school psychology. To impact kids’ lives, you have to be effective at impacting adults.”

According to Arlene Silva, Ph.D, chair of the School Psychology Department at William James College, school psychologists have to think on a system level that encompasses prevention, school climate, practices to promote social emotional learning, consultation and supervision.

“It’s more like a public health model,” she said.

Societal demands have impacted the way schools operate and the problems they now face. Increased awareness of the potential for crisis has led to advance planning and preparedness drills.

Silva noted that the opioid crisis has prompted the creation of substance use prevention programs as well as responsiveness initiatives to mental health issues in the schools.

Additionally, schools are more aware of the importance of cultural diversity.

“There are issues of privilege and power, but school psychologists have to advocate for all people,” Silva said. “A culturally responsive practice reflects growing diversity.”

Today’s graduate students working toward a school psychologist specialty also differ in a couple of ways from students of the past, according to Jen Arner Welsh, Ph.D, professor of psychology at Quinsigamond Community College in Worcester, Massachusetts.

She pointed out that current students have spent their entire academic lives “in the shadow of Columbine,” so come into the program with different concerns and perspectives.

Welsh added that these students are also a highly diverse group related to ethnicity, culture, sexuality, and ability.

She emphasized that these attributes are “incredible strengths, especially for school psychologists,” since many American schools comprise a diverse body of students.

Additionally, many of these students have undergone mental health counseling personally or know someone who has so have more experience with what a school psychologist is, Welsh said.

“They have thought more about school psychology, which might be what draws them to the profession.”

As a school psychologist specialist for the last 20 years in the Maranacook Area Schools System in Southern Maine, Susan Holinger, MS, NCSP, has witnessed first-hand the evolution in the field.

Passionate about her role, she was named School Psychologist of the Year in 2015 by the state of Maine.

Holinger has developed organizational skills that have helped her grow in the position and enable her to execute multiple responsibilities more effectively.

In addition to the usual duties of performing high-quality assessments and serving on the intervention team, Holinger has worked with Maine legislators to create laws focused on a specialist certificate.

She has also been involved in several state level associations, advocacy groups, and panels. Her participation helps foster professional contacts, enhances her knowledge in the field and allows her to share information with others in the school district.

Additionally, Holinger and two colleagues revised learning disability eligibility forms and conducted trainings on the new document for directors, teachers, and other specialists.

While some school districts struggle with violence, Holinger’s district faces a different issue. She said that half of all children born in this geographic area have crack-addicted mothers. [Ed. – This statement is not supported by the fact that at its peak, the rate of drug-affected babies born in Maine was at its highest in 2016 at 8 percent, or about 1 in 12 mothers — not 1 in 2. This is according to the Maine Department of Health and Human Services.]

These children are not cognitively delayed. Rather, they have significant emotional and behavioral difficulties, having suffered “insult before birth,” Holinger said.

She indicated that working with teachers helps them understand the underlying reasons for this behavior.

2 Responses to School psychologists: In a class of their own