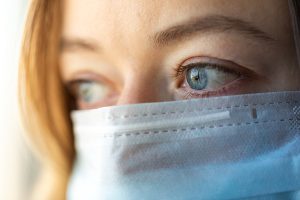 After several months of quarantine, psychologists are eager to assess the emotional repercussions of the COVID-19 pandemic. Three psychologists teamed up to create a scale that evaluated mental health during this crisis and found both expected and some surprising results.

Sarah Gray, Psy.D, director of outpatient rehabilitation psychology at Spaulding Rehabilitation in Boston, said, “As a health psychologist, the psychological effects of the pandemic in society and how that affects our patients is of particular interest to me.”

Gray explained that this national survey was developed “completely in reaction to the pandemic.” She added, “Our report focuses on the ways that the pandemic has affected the majority of the general population, and also looked at specific categories such as race, gender, and age to assess effects and risk of negative mental health outcomes. We were trying to quantify the risk factors.”

The survey is based upon a scale created by Olafur S. Palsson, Psy.D, professor of medicine in the division of gastroenterology and hepatology, Center for Functional GI and Motility Disorders at University of North Carolina.

This project was part of a series to “examine the role of specific psychological factors that make some individuals more vulnerable than others to experiencing adverse mental and physical consequences from stressful life events.” Gray said, “[Dr. Palsson] developed a scale by staying on top of the news from which he pulled different themes.”

To accurately capture quality information, the researchers created the Pandemic Emotional Impact Scale (PEIS). Similar to the Beck Depression and Beck Anxiety Scales, it also weaves aspects of the Patient Health Questionnaire-4 (PHQ-4) into the tool.

“It gets at depression and anxiety symptoms,” Gray said.

The nationwide Internet survey took place in the second half of May 2020; the 1,500 adults who completed the survey were identical to the U.S. population by gender, age group, ethnicity, education level, and geographic region.

Gray reported that the parameters were specifically set to replicate the general population so the team would be “comfortable making generalized statements.”

At the conclusion of the survey, the research team determined that a clear majority of people has been affected by the pandemic. “Ninety percent endorsed at least one aspect of the scale,” Gray said. “A quarter of the population went on to endorse more than one, indicating an extreme impact.”

But there were some unexpected findings, according to Gray, such as the breadth of the impact. “We knew most people would be affected somewhat, but we didn’t expect the extreme extent,” she said. For instance, 38 percent of all households experienced job loss and/or loss of income. “We felt this was very significant.”

Boredom and frustration at not being able to do usual things ranked in the top five or six, which the researchers found surprising.

Although women were impacted more than men, Gray and her team expected a more intense effect on females. She noted that some women with children under the age of 18 did express a high level of stress.

Another relatively unexpected result was the impact the pandemic is having on younger people, who reported higher stress levels than older adults. “This [younger] generation is being significantly impacted and this showed in our study. It’s important to target this population,” Gray said.

The team assumed that the older generation, which is at higher risk for contracting the virus and with potentially serious consequences, would be more worried. However, adults over the age of 50 were less concerned and those older than 65 showed an even lower negative emotional response.

Gray and her colleagues hypothesized that older adults have been through several crises, such as prior wars, rationing and other extreme experiences that have given them more wisdom and perspective.

Also, older adults may be more secure financially and career-wise, Gray said. “They may have savings and retirement funds, a cushion that younger adults don’t have.”

The role of participants’ education level in the responses came as a big surprise to the researchers. “There was no real difference in terms of education levels, whether the person had a doctoral degree or none at all. Usually this is a protective factor,” said Gray.

However, the survey did yield some important takeaways and positive results. Not all participants reported negative effects, according to Gray. “Ten percent hadn’t experienced any of the 16 items on the scale.”

Additionally, approximately half of the sample had increased stress but no clinical symptoms of anxiety or depression.

Gray reported that the PEIS is freely available to use in research and clinical practice and can be found at http://pandemicimpactreport.com/researchers.html. Gray encourages others to use the scale and work on creating a self-assessment tool. The PEIS is designed to help clinicians and their clients through the COVID-19 pandemic and other waves, Gray said. “It would be important to use in case of future lockdowns. The wording is such that it is not pandemic related only. Similar concerns could arise when the scale can be used.”

Gray pointed out that if psychologists administered the PEIS to their clients, the results could be useful in diagnosing and developing a treatment plan. The more of the 16 items the client endorses, the higher the risk for a clinically significant emotional impact, including anxiety and depression, she added.

By looking at the areas the client endorsed, the psychologist can do “solution-focused work” and link the client with appropriate social services resources and education. “There is a real need for stress management basic coping skills,” Gray said.

Gray indicated that the team would follow up with more scientific papers based on the data later this summer.

The full report is available at http://pandemicimpactreport.com/