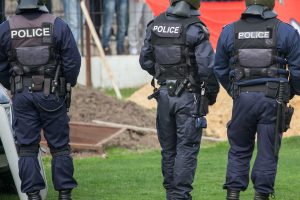 According to the National Institutes of Mental Health (NIMH), eight of every 100 individuals will experience post-traumatic stress at some time in their life; unlike civilians, police officers, on average, experience three traumatic events every six months. The frequency and intensity of these events may have a serious psychological impact on the officer at the moment and/or weeks, months or years in the future.

She pointed out that the LEADER designation applies to all first responders, including fire and corrections personnel. In addition to outpatient treatment, the program offers inpatient care and detox, gender-specific residential and partial hospital care, and a variety of late-day and weekend support groups for those in uniform.

The LEADER program was created following the 2013 Boston Marathon bombing. In addition to this traumatic event, the number of suicides in the Commonwealth was increasing at that time and the National Guard requested access to professional care.

In her work at the LEADER program, Farber evaluates individuals and bases her assessments, in part, on the timing of an incident. Some first responders may ask for counseling immediately after a traumatic event, while others might wait years before seeking help.

To develop a treatment plan, Farber also examines the level of symptoms. For instance, she asks how the trauma is affecting life, functioning, sleep habits, and family situations. Does the individual manifest an exaggerated startle response, avoidant behavior, self-blame or second guessing?

Using evidence-based treatment methods, Farber begins to build support and strengthen coping skills as she helps the individual manage this or her stress level. It’s important to increase trust that allows psychologists to adapt treatment to individual needs, she said.

For those with post-traumatic stress disorder (PTSD), Farber may engage in cognitive processing, prolonged exposure therapy or some other more pertinent intervention.

“There is a lot of individualization,” she said. “The person might need to spend more time on how the sense of safety has been impacted.”

Gary Geysen, Psy.D., clinical and forensic psychologist in Glastonbury, Connecticut, reported that after the death of George Floyd in Minneapolis, the state recognized a need and passed a law promulgating mental health services for police that includes screening for different types of potential mental health problems.

In the absence of national standards, Geysen developed a screening tool for individuals already working on the police force. The battery evaluates for what he calls the Big Five: anxiety, depression, suicidality, PTSD, and substance use.

“I also look for burnout, family issues and stress management,” he said.

Law enforcement officers’ response to trauma may also be impacted by media coverage and societal, cultural, and community attitudes, Geysen noted. Moreover, the age of an officer may have some bearing on response; younger individuals have different cultural values and their attitudes toward society differ from those of an older officer, he pointed out.

While law enforcement has become more open and accepting of therapeutic intervention following a traumatic event, there is still “…a lot of insularity behind the badge.” Geysen noted that police “…often only turn to the self for wellness.” He said, “There is a strong orientation to not show vulnerability.”

In recent years though, there has been a shift in larger metropolitan law enforcement departments, according to Geysen. Some departments have created internal behavioral health units, while others are working to develop and implement peer support programs.

“There has been a gradual groundswell of change,” he said. “We are starting to recognize that chronic stress develops over time. From doing this work, we are recognizing that we have to support the police.”

Agencies in Vermont have taken a lead in addressing mental health issues in the law enforcement ranks. Lori P. Gurney, MS, CTS, CCISM, is a contracted clinician for the Vermont Department of Public Safety (DPS) and the Vermont State Police (VSP).

She provides ongoing clinical care for the members of these agencies and for their families. “This is a members’ supported system, robust, and well trained,” she said.

The DPS and VSP proactively tend to the mental well-being of its members. Gurney is deeply involved from the time men and women become recruits and throughout their law enforcement careers.

As part of a team comprising a chaplain, team leaders from each barracks, a handful of liaisons and peers, Gurney delivers a PowerPoint presentation during family day at the State Police Academy. “We make really clear what services we offer that manage issues before they become traumatic,” she said.

During a recruit’s second week, Gurney engages in a one-on-one conversation to establish a mental health baseline and start to build a relationship. She explains that the goal is to meet during field training at least four times before officers go on the road. This type of preparation serves to reduce any possible intimidation when a traumatic event occurs, she noted.

When trauma does occur, the lieutenant on the support team is the first person alerted. A one-on-one check-in within eight hours evaluates basic immediate needs and defuses the situation. The entire team is trained in critical incident stress management (CISM), an umbrella technique for all the interventions they use.

Gurney has found that this model has led to acceptance by Vermont’s law enforcement personnel. “When they show up, they are ready to do the work,” she said. Maintaining ongoing communications creates a comfortable atmosphere. Gurney said that the culture at VSP is different from other state police organizations. “This program is therapeutically important to building relationships,” she said.