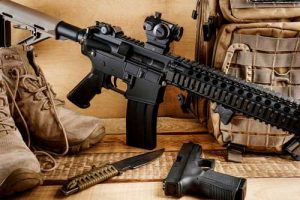 “This was a person who was sick, very sick,” President Donald Trump said at a Feb. 21 White House forum.

Trump was referring to the 19-year-old shooter who used an AR-15 style assault rifle to gun down teachers and students at a high school in Parkland, Florida, on Feb. 14. The mass shooting left 17 dead.

Calls for limiting the right to bear arms for people with mental health issues increased after the Parkland shooting, especially for red flag laws that would allow police to take firearms away from people suspected of being a danger to themselves or others.

But focusing gun control conversations on the mental health of those pulling the trigger raises red flags for mental health advocates.

“When we convey the message, particularly to young people, that mental illness is something to be feared and that mental illness is a menace to society, we drive people away from treatment who need to be seeking treatment,” said Ron Honberg, J.D., senior policy advisor for advocacy and public policy for the National Alliance on Mental Illness.

“There are a lot of angry, alienated young men walking around in a society where access to guns is easier than access to mental health care.” --Ron Honberg, J.D., senior policy advisor for advocacy and public policy, National Alliance on Mental Illness.

Honberg said Trump’s language in talking about gun violence makes it seem like all violence is attributable to mental illness when, in fact, it is only a very small percentage.

Research has found only a modest association between mental disorders and violent behavior: About four percent of violence in the U.S. is associated with severe mental illness, according to often cited research led by Duke University School of Medicine Professor in Psychiatry and Behavioral Sciences Jeffrey Swanson, Ph.D.

The remaining 96 percent of violence is attributable to factors including being young and male, substance use, impulsive anger, poverty, childhood physical abuse, and previous exposure to violence.

“There are a lot of angry, alienated young men walking around in a society where access to guns is easier than access to mental health care,” Honberg said.

The federal government spends about $22 million a year on research into gun violence — just a fraction of what it spends on other major health threats. That’s because since 1996, the U.S. Centers for Disease Control and Prevention has been blocked by a budget appropriations measure from conducting research on firearms deaths and injuries.

The task force reviewed the available scientific research on the causes of gun violence in the U.S. and offered strategies for ways it can be reduced in a report released in December 2013.

The report concluded there was no consistent psychological profile or set of warning signs that could reliably identify perpetrators of mass shootings in the general population.

“What we do have is a lot of people who are in immediate, intense, urgent emotional distress – panic, rage, desperation, jealousy, whatever else it might be,” said Kinscherff, associate vice president for community engagement and an associate professor in the doctoral clinical psychology program at William James College in Newton, Massachusetts.

“Their urgent sense of emotional distress plus access to a lethal weapon contributes substantially to intimate partner violence, to workplace violence, violence against neighbors. Those are typically not the people with major mental illnesses.”

William James College is in the process of revising curriculum to devote more attention to training clinicians to do lethality assessments in situations where there may be suicide or homicide risk.

The material, which includes specifically asking about access to guns when there are concerns about a client’s mental status, is introduced in first-year clinical seminars and is on-going, Kinscherff said.

“People often forget that especially for younger people, the direction of the violence from self to others can turn very quickly and so we’re looking to equip our students with greater skill in doing the assessments, more access to training in specialized risk assessment for violence including gun violence,” Kinscherff said.

Kinscherff said red flag laws should be just one part of multi-pronged approach to reducing the estimated 30,000 gun deaths that occur every year in the U.S.

But he said research is needed to determine their effectiveness.

“If people want to pass red flag laws and capture the data and see whether or not they actually work and what kind of resources it takes to implement them, I’m not opposed to the experiment,” Kinscherff said.

“How much law enforcement time and resources do you want to expend trying to eliminate a relatively rare event when those resources may be deployed in a more research-based way?

Similar proposals have been introduced by lawmakers in Maine, Massachusetts and in Rhode Island where Gov. Gina Raimondo also signed an executive order authorizing police to use all legal steps to remove guns from people deemed a threat.

Kinscherff said there is good data already on laws that are having an effect in reducing intimate partner violence, community violence, and citizen-police encounters.

For instance, states where gun permits are issued by a state or local law enforcement authority have lower rates of gun violence, he said.

After the state of Missouri repealed its permit-to-purchase handgun law in 2007, researchers from Johns Hopkins Center for Gun Policy and Research found a 25 percent increase in firearm homicide rates over the next five years while none of its bordering states experienced significant increases in murder rates.

The U.S. murder rate actually declined by more than five percent during the same period.