Drama therapy: Creating meaningful change for those in recovery 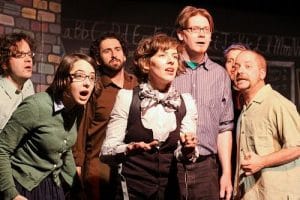 Since the sixth century BC, drama has been a prime source of entertainment as well as an effective vehicle for developing social, communication, and language skills. Dramatic play has also been found to relieve emotional tension and stress. The UMass MIND program, a community outreach program of the Psychotic Disorders Program, has recently begun using drama therapy to help individuals in recovery.

Her expertise helped facilitate the creation of the drama therapy program at UMass.

Xiaoduo Fan, MD, MPH, MS, director of the Psychotic Disorders and Clinical and Research Program at UMass, reached out to Lesley University in order to launch a drama program for people with serious and persistent mental illness.

Fan champions and supports the overall vision of drama therapy, Wood reported. She said that Fan knows the value of working with a difficult-to-treat population and wanted to build a drama therapy manual model.

Until now, there have been no manualized models in drama therapy, Wood noted. So, she and colleague Dave Mowers, MA, created the Co-Active Therapeutic Theatre (CoATT) model, which is being utilized in the UMass MIND program.

Wood explained that the model invites the cast to coactively identify a theme that the group agrees to work on; ensuing discussion then generates material that the cast uses to create a “skeletal structure.” There is no set dialogue, just a basic idea, she noted. Individual participants can make changes to only his or her lines at any time up until the night of the performance. However, the basic theme remains the same. “They create the production in service to their recovery,” Wood said.

For instance, a play about eating disorders would address “…learning to be in space and feeling worthwhile.” Wood said, “This is so relevant to an eating disorder. The inner critic voice gets challenged.”

Fan’s team recruits and screens applicants for the program. Using the drama program as a teaching tool, he brings medical students to every production and, in combination with diagnostic information from the DSM-5, they see and better understand first-hand the struggles individuals with mental illness face.

One of the core principles of CoATT requires the performance be in a public space, although some individuals would prefer to screen the audience. However, Wood believes it’s a “disservice to limit or curate the audience.” She said, “The characters need to feel strength in recovery and not be toppled over by audience reaction.”

Wood received a $95,000 grant from the National Education Association that allows for five productions.

After receiving the grant, the original plan was to stage in-person performances. However, when COVID hit, the group decided to switch to an online model and give virtual performances. Unsure of the impact on participants, Wood was surprised and heartened to learn that most participants found the experience of a remote platform “grounding and supportive, especially when feeling isolated due to COVID.”

As restrictions begin to ease, Wood anticipates adopting a hybrid model. She explained that the first rehearsals will take place online and shift to in person at a later date.

Wood reported that participants continue treatment with their psychiatrists while taking part in drama therapy and some attend day programs. “They are all engaged in some other program, depending on their needs,” she said.

Theatre creates confidence and efficacy, according to Wood. She emphasized that the plays are not psychoeducational in nature. Rather, each production is the product of the participants. She said that participants begin with asking which theme of recovery they would like to pursue and to share with a public audience.

Individuals who participate in these productions face some challenges, she said. Historically, therapists push those in recovery toward reality and staying grounded. “Drama therapy is just the opposite,” she said. “The individual takes on a role. We look to what might be contraindications or triggers but [drama therapy] allows the participants to firm up their relationship with stepping in and out of dramatic play space.”

Furthermore, when performed in a public space, drama therapy helps to destigmatize mental illness. “We have seen promising quantitative and qualitative results,” Wood said. “The roots of drama and therapy are representative fantasies of what we want life to be. It’s a meaningful way to connect people through other people and make systematic change.”