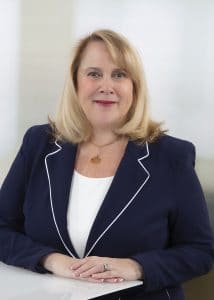 Debra A. Greenwood, president and CEO of The Center for Family Justice (CFJ) in Bridgeport.

The National Domestic Violence Hotline issued a snapshot in the spring. In March 2020, volume had decreased by six percent in comparison to the same time the previous year. But by April, the volume increased by 15 percent compared to April 2019.

By June 2020, the hotline reported what victims were experiencing when they called: 97 percent spoke of emotional and verbal abuse; 65 percent indicated physical abuse; 29 percent for economic control and financial abuse; another 18 percent for harassment over text or social media; and 14 percent was sexual abuse.

Coinciding with the rise in abuse and violence, often called intimate partner violence (IPV), the expense of emergency housing—not including food or basic necessities—proved costly. In some cases, shelters had to limit the number of people they could take in because of social distancing rules. Others were asked not to take in any more survivors and to “de-densify” their facilities. As a result, hotel chains became the next alternative.

While this is a widespread issue, the problem is not lost on the state of Connecticut. Debra A. Greenwood, president and CEO of The Center for Family Justice (CFJ) in Bridgeport, said when the state was first impacted by the pandemic with stay-at-home restrictions in March, her organization braced themselves for things to get worse—and they did.

Their safe house, which can accommodate up to 15 adults and children, has been at or above capacity since then.

“Being forced to shelter in place with an abusive partner or spouse or family member for an extended period is just a situation designed to exacerbate and escalate the power and control dynamics that exist in these relationships,” she stated in a recent email. “When we have a client in crisis who needs to leave their abusive living situation and requires safe housing immediately, we do not turn them away even if our shelter is at capacity.”

Between March and December of last year, hotel nights increased by 128 percent and shelter bed nights have increased 718 percent compared to the same time the previous year.

An increase in need equals an increase in cost. Greenwood said they have already spent $50,000 on emergency hotel stays for clients. For the past several months, they have relied heavily on fundraising and donations. Some of that money, she said, was reimbursed by their domestic violence coalition, the Connecticut Coalition Against Domestic Violence (CCADV), through funds provided by the state’s Department of Social Services.

Liza Andrews, director of communications for CCADV, said they had to “beat the bushes and rattle some cages” to get additional funding. Some of that funding came from pandemic-related FEMA funds as well as from 4-CT and the Seedlings Foundation.

But aside from the funding issues, she said, the hardest part initially was getting the word out that shelters were still open 24/7. Most people assumed because everything else was shut down, so were they.

“In this pandemic, we’ve definitely seen an increase in the complexity of cases. There have been stressors because of unemployment, childcare, kids being home,” she said. “We knew that if [the rates] were where it was at this summer, winter was only going to be worse.”

Andrews explained her organization, which runs the state hotline, often sees an uptick in the early winter months even without a pandemic. During the holidays, a lot of victims try to just stick it out and make the best of the situation.

But then, they reassess how the relationship is going and that’s when the hotline gets more calls coming in. While everyone seems to agree the pandemic created an environment ripe for the rise in domestic abuse cases, Mary Jane Foster, president and CEO of Hartford’s Interval House, was careful to point out it’s not just the frequency, but the intensity.

“We have one woman in the safe house who was beaten unconscious and had her apartment set on fire,” she said. “It’s gone from fists to objects. Anecdotally, we’re seeing an increase in strangulation and an increase in the use of knives. I don’t know why, maybe they’re more accessible.”

Andrews said CCADV has been tracking IPV homicides since 2000. In the past few years, they have seen an uptick in knife use but firearms are still the top weapon of choice.

Like Greenwood, Foster also discussed the financial impact of sheltering victims. She said placement of survivors in hotels increased “a staggering amount.” The average hotel cost per month is $11,000, which is up by about $500 to $1,000 per month.

Occupation of their 20-bed safe house is at a capacity of 143 percent, which is up 41 percent. They have totaled more than 1,800 bed nights in the hotels, which incorporates 52 households, or 98 individuals.

“Isolation at a hotel is not ideal, but it’s certainly better than being turned away,” she said, emphasizing they never turn anyone away. “We work with a number of hotels in the region and have negotiated arrangements with them. We offer a combination of food options—from a delivered hot meal to gift cards for basic necessities. Gift cards for Walmart and Target make a huge difference because you can get food, clothing, school supplies, all in one place.”

Now that vaccinations are rolling out, will rates of domestic abuse be more in line with what we saw in 2019? It’s not that simple. Foster said it will take quite some time to bounce back to “normal.”

“Full recovery from the pandemic is a long way off and is different from being vaccinated,” she said. “Vaccination will certainly eliminate isolation and increase mobility. But that doesn’t address the economic fallout from this pandemic.”