Confiding in others identified as the strongest protection against depression 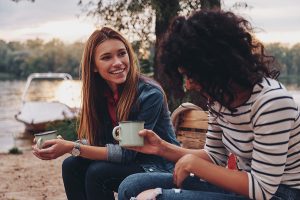 A new study has found that strong social connections are the strongest protective factor for depression.

“Depression is the leading cause of disability world-wide,” said Karmel Choi, Ph.D, an investigator in the department of psychiatry at Massachusetts General Hospital and the Harvard T.H. Chan School of Public Health, and lead author of the paper.

“About one in five people will experience an episode of major depression in their lifetime. If we could prevent depression, we could not only reduce years of suffering, but also improve health and life outcomes.”

That led researchers to ask the question: Which modifiable factors in people’s lives—whether their diet, physical activity, media use, sleep habits, social interaction, or environmental exposures—could be the most important for preventing depression?

According to Choi, researchers drew on data from more than 100,000 adult participants in the UK Biobank for the study, which was published in The American Journal of Psychiatry.

“This wide-ranging data was collected with the efforts of many dedicated research staff and participants in the UK over the span of the past five to 10 years,” she noted.

The researchers then took a two-pronged approach to analyzing the data.

“First, we conducted an ‘exposure-wide association scan’ to look across more than 100 modifiable factors reported by participants—ranging from diet, physical activity, media use, sleep habits, social interaction, and environmental exposures—to see which ones were associated with the risk of developing depression,” Choi explained.

“We then followed up the top results with a statistical technique called Mendelian randomization, which treats genetic variation between people as a kind of natural experiment to help us determine whether an association looks like it may be causal.”

“Knowing whether an association may be causal versus not is important because when we pick our intervention strategies, we want to target factors that don’t just co-occur with depression, or happen as a result of depression, but those that could change someone’s chances of developing depression,” she continued.

Of the more than 100 variables, the one that emerged as the strongest protective factor for depression was confiding in others, according to Choi.

“This really put the spotlight on trusted social connections,” she said. “It was less about how much time you spent seeing people — although that was helpful too—but rather how often you reach out and share something about yourself and what you’re going through.”

“These factors are more relevant now than ever at a time of social distancing and separation from friends and family,” added Jordan Smoller, M.D., ScD, associate chief for research in the MGH department of psychiatry, and senior author of the study.

The protective effects of social connection were present even for individuals who were at a higher risk for depression as a result of genetic vulnerability or early life trauma, the researchers added.

What factors increased the risk of depression?

The researchers found that time spent watching TV was a top factor — although they note that additional research is needed to determine if that risk is because of media exposure or whether time in front of the TV was a proxy for being sedentary.

Perhaps more surprising, according to researchers, were findings that the tendency for daytime napping and the regular use of multivitamins appeared to be associated with depression risk. They added more research is needed to determine how these might contribute to the risk of depression.

The researchers say their findings could be useful for not only health care providers, but also policy makers and, perhaps most importantly, those suffering from depression.

“Our findings could be useful for policy makers in designing depression prevention interventions at a population level,” Choi said. “Our findings could also be a useful touchpoint for clinicians and health providers who are looking to counsel their patients on ways to protect their mental health, especially those who are at higher risk. Our findings also point to specific things that people can start doing today to help manage their own risk of depression.”

The research continues, according to Choi. “We are now studying the various modifiable factors that could help us offset mental health risk in younger people,” she said.

Meanwhile, the study demonstrates an important new approach for evaluating a wide range of modifiable factors, according to researchers, who say the findings can be used to prioritize targets for preventive interventions for depression.

“Depression takes an enormous toll on individuals, families, and society, yet we still know very little about how to prevent it,” Smoller said. “We’ve shown that it’s now possible to address these questions of broad public health significance through a large-scale, data-based approach that wasn’t available even a few years ago. We hope this work will motivate further efforts to develop actionable strategies for preventing depression.”
The study’s two-stage approach could also be used to study the prevention of other health conditions, the researchers noted.

“For example, we could scan hundreds of modifiable factors associated with the risk of developing diabetes or dementia, then follow up to see which ones could be the most promising targets for prevention efforts,” Choi concluded.