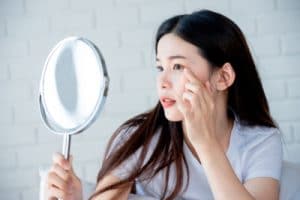 Sleek physiques, flawless skin, and perfectly symmetrical facial features. For some individuals, achieving physical perfection becomes an obsession. This atypical behavior may be an indication of body dysmorphic disorder.

Rachel Simmons, Ph.D, defines BDD as an intense focus on one or more aspects of appearance with the belief that they are abnormal, although in most cases, these perceived flaws are minor or non-existent.

Simmons is a clinical assistant professor in the department of psychiatry and human behavior at Brown University’s Warren Alpert Medical School. She noted that some patients spend between one and eight hours a day focused on thoughts about their appearance.

Additionally, patients have poor insight into their condition. “Most patients with BDD are mostly or completely certain they look abnormal, ugly or unacceptable,” said Simmons. “They have the idea that others are taking special notice of their ‘flawed’ appearance.”

Patients with BDD – the disorder affects males and females nearly equally – engage in rituals, such as excessive grooming, mirror checking and comparing themselves to others.

“This can be incapacitating for those who have a severe case,” said Simmons. Some patients might become housebound, lose relationships and experience difficulties at work or school, while others function well and manage the disorder, she added.

BDD, which shares some common traits with obsessive-compulsive disorder (OCD), typically develops around the age of 12. Hormones might play a role as pre-teens and teens become more aware of social dynamics and status, according to Simmons.

“Teens are under the stress of trying to find their place in the hierarchy at school,” she said.

James Claiborn, Ph.D, ABPP, independent practitioner in South Portland, Maine, suggested that patients with BDD might have a hereditary predisposition. They may also have been teased or harassed about their appearance or have had experiences where appearance was emphasized as being very important.

The intensity with which BDD patients view their appearance could be considered delusional and equivalent to psychosis, according to Clairborn.

“They are convinced about the defects and horror of their appearance and the deformities they think they have,” he said, adding that people with delusions “tend to jump to conclusions and have a rapid overconfident style of reasoning.”

Furthermore, they sustain these beliefs, even though they differ from what others think.

Claiborn said that approximately two percent of the general population is diagnosed with BDD; however, in many cases, the diagnosis remains unrecognized.

He explained that patients typically seek help from dentists, dermatologists, and/or plastic surgeons as a first course of action. Other medical professionals seldom refer patients for psychological intervention, he added.

“We have been advocating for educating plastic surgeons, dermatologists, and other providers about the risk of working on BDD patients,” said Claiborn.

Patients who are typically dissatisfied might become hostile and aggressive when they think the provider is not doing his job.

Clairborn has suggested that these other practitioners might want to refer patients to mental health therapists, but he said the idea “doesn’t seem to be taking hold.”

Currently, two evidence-based interventions are treatment options for BDD. Selective serotonin reuptake inhibitors (SSRIs), such as Lexapro and Prozac, are sometimes prescribed, although few medical studies have been conducted to verify their effectiveness, Simmons said.

But treating patients with BDD can be challenging because many do not disclose their concerns, according to Simmons. Most patients truly believe their appearance is defective and feel the most appropriate treatment is a physical remedy.

Simmons said, “They have a fear of being misunderstood or think that you’ll agree with their [perception of] appearance. They think psychologists have little to offer. We’re not plastic surgeons.” She suggested that specific questions related to worry about appearance be included in a routine intake.

Fang is assistant professor of psychology in the department of psychiatry at Harvard Medical School. And, she works in the OCD and related disorders program at Massachusetts General Hospital.

The self-conscious study will examine BDD, also known as self-focused attention, in great depth. Fang explained that brain research indicates patients with BDD tend to be detail oriented, “…zooming in on part of the face they dislike and then do the same with others.”

The idea is that patients “attend inward,” paying attention to their own negative thoughts and feelings, especially in social situations.

“They can’t integrate corrective information. It gets in the way of taking in new information. We are trying to understand the brain underpinnings of the process,” Fang said.

The study is open to individuals between the age of 18 and 45. Patients will undergo magnetic resonance imaging (MRI) while in a resting state with eyes open. The hypothesis is that BDD patients think a lot about their appearance, even at rest.

Fang expects to see excessive activity in the default mode network (DMN), which are interacting brain regions that become active when a person is not focused on the outside world.

“A general scan allows us to look at how the brain operates,” she said.

Fang anticipates that the findings from the brain imaging study may be useful in developing better intake questions and eventually lead to more effective interventions.

“We can use more precise information around presentation to assess multiple levels to guide treatment recommendations,” said Fang.

Fang pointed out that this program is one of the few BDD specialty programs in the world and provides a good opportunity for patients who have limited access to treatment.

“Research is a great way to get treatment not otherwise available,” she said. The study offers consistent treatment with the same clinician throughout the entire study period.

In addition to the brain imaging study, Fang’s group is developing a smart phone app that will address body image concerns and will be available anywhere in the country.