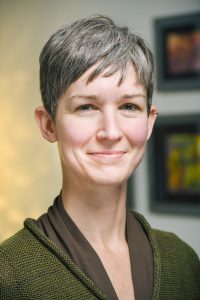 Teresa Johnson, Ph.D, chairperson for the Committee for Women, Minorities, and Diverse Communities for the New Hampshire Psychological Association (NHPA)

Discrimination in employment, housing, or places of public accommodation on the basis of gender identity is now prohibited in New Hampshire.

Teresa Johnson, Ph.D, chairperson for the Committee for Women, Minorities, and Diverse Communities for the New Hampshire Psychological Association (NHPA), said the NHPA is in support of this law.

“I know that we have lost long-time New Hampshire residents for this reason.”

The passage of the legislation should offer some relief to her clients.

“I think they feel more recognized as human beings and knowing that it’s as important for them not to be discriminated against as everybody else,” Johnson said.

Even with the law’s protection, Johnson said New Hampshire is still an employment-at-will state, so an employer could still let an employee go without cause.

The legislation gives the individual recourse, she said.

“I think the passage of a bill like this can be a wakeup call to cisgender people to look at our own biases. Ultimately, that’s the core of it. The legal protection is really important but the real impact is on how people treat each other, and how they judge each other.”Johnson said she has had transgender clients who were transitioning, and were trying to understand the protocols that their employer had around disclosure.

Some clients have had problems with issues such as notifying employers about time-off for medical procedures; and how to go about presenting with a different name and gender at work.

“Not having any protection around discrimination leaves so much vulnerability in so many different areas,” she said, adding that she’s had clients lose their jobs following transition.

She spoke of another client who felt he didn’t have safe restroom access at work so avoided liquids and bathrooms, ultimately getting a UTI.

Johnson said she’s heard from employers, including medical providers and hospital administrators, who’ve asked her about education for their staff on how to provide care to transgender patients.

Questions have centered on how to make patients feel safe and meet their needs as well as the use of preferred pronouns and a person’s chosen name, even if it’s not yet their legal name.

Johnson said this fall the NHPA will offer continuing education training for psychotherapists on how to support transgender clients from a compassionate perspective.

One of the next steps, Johnson said, is contacting all insurance companies to cover medical care for transition services. “I think having that requirement in New Hampshire would be a great service to our transgender residents,” she said.

Pamela Berard has been a contributing writer for New England Psychologist for almost two decades. She is also senior editor for a technology publishing and events company, and was previously city editor at several daily New England newspapers.