What I learned on the Mount Misery Trail 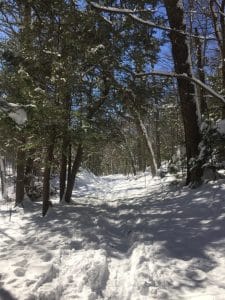 It was one of those perfect winter days, cold and clear with the bluest of blue skies above six inches of blindingly white snow that blanketed the frozen pond, the trail through the pines and the meadow below.

The trail skirted the base of a small hill, Mount Misery, which gives its name to this reservation where Thoreau used to amble on excursions from his cabin at Walden Pond. My wife and I were ambling in his footsteps, enjoying the beauty of nature and taking photos to inspire her landscape paintings. If ever there was a time and place to be perfectly content living in the moment, it was here and now.

“I’d like to come back later this week with my cross country skis,” I said, noticing the tracks of skiers who had broken the trail before us. My wife said nothing, but I knew what she was thinking.

“Then I’m coming with you,” she replied.

“No, I don’t have the balance I used to, and I don’t think you do either. I need to be here in case you run into trouble. What if you fall?”

Back home, invigorated by our walk in the woods, we fell into our usual routine and I said little about my wish to ski the Mount Misery trail, except to mention it every once in a while, just so she wouldn’t forget.

Silently, I was considering the wisdom of what I knew deep down was a perfectly foolish idea. I was 73 years old and hadn’t been on cross country skis for three years, even then, sticking to a perfectly flat soccer field where my chances of falling were minimal.

My balance was off. Every week in yoga class, I had to steady myself with my hand on the back of a chair as we cycled through the catalogue of balance poses. These were the messages of my rational mind while my emotion mind was conjuring up irresistible images of a skier gliding gracefully through the pines. I just didn’t realize at the time that that skier wasn’t me. He never had been.

Four days after our hike, we were back at the reservation, me with my 45-year-old skis and brittle leather boots and my wife in her comfortable walking gear. The going was rough in ski tracks that had been largely worn away beside a hard-packed hiking trail.

After a while, the meadow spread out before us just down a little incline, too small to qualify as a hill, but just steep enough to give me second thoughts. I should have listened. My fall was spectacular, skis going out from under my feet, slamming me onto my back and ripping the sole almost completely off one of my boots. My wife helped me up, and despite some pain, I was able to stand and walk, supporting myself between my two upright skis.

My wife never said, “I told you so.” She didn’t have to. My folly was obvious and I admitted it. So, we walked back the way we had come, stepping off the trail at one point to make way for an approaching skier.

He looked to be about my age and carried himself with poise as he shushed along in measured, even strides. His skis were of the traditional wooden kind and he wore spats over his boots. We exchanged hellos through the masks we wore to protect us from the COVID-19 virus and chatted for a minute or two.

“You probably don’t need the warning,” I said, “you look like a better skier than I am, but I took quite a fall going down a little hill at the end of the trail. My balance isn’t what it used to be.”

“I know what you mean,” the man replied, “I’ve had to slow down myself as I’ve gotten older. It’s a shame how our bodies change.”

Then, as if wrestling with his surrender to the aging process, he told me a story about the actor Clint Eastwood, who is known for his busy routine and active lifestyle even as he approaches his 90th birthday. The man said that an interviewer once asked Mr. Eastwood how he manages to do so much as his age. “The secret,” replied the actor, “is this: Don’t let the old man in.”

I limped out of the woods with that line echoing in my head. It had a nice ring to it and it was a reassuring thought, but I was still limping. My shoulder was sore and though I could walk without pain, bending my foot to climb stairs hurt like hell. Then came the guilty thoughts about not being able to do my share of snow shoveling if I was to be sidelined with a serious injury, not to mention the inconvenience and risk of going to the doctor’s office during the pandemic.

The day after the accident, I felt like I had been run over by a truck. The next day, I felt better, and by the third day, I was back to my old self, but wiser now with a new insight. Don’t let the old man in might be good advice, but sometimes you have no choice. There comes a day when the old man breaks down the door, and you find yourself staring him in the eye. Then you know it’s time to make a deal.