The way we live now 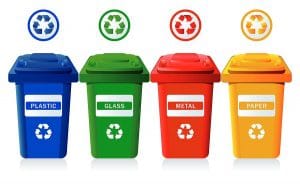 The dump or recycling center has long been a hub of social and civic engagement in the town where I have lived for the past 42 years. Recycling bins for every kind of material earn the town hundreds of thousands of dollars every year, and candidates for public office are often on hand to woo voters to the ranks of their supporters.

Autumn brings mountains of leaves, the remnants of New England foliage that nature’s alchemy turns into dark, rich topsoil, free for the taking in spring. And every season gives us more books than we can read in a lifetime. Five shelves on each of three bookcases fill with volumes that make us think, wonder, laugh, and sometimes cry, only to empty and fill again with the record of all that makes us human. The books on the shelves can teach you a lot, but sometimes the story plays out right in front of your eyes.

So it happened one day in that idyllic space between the heat of summer and the chill of autumn when my wife made her customary stop in front of the books to see what was on offer. Her stop there was routine, but in this new world of Covid-19 precautions, little of the ordinary survives in this familiar setting. Sawhorses in every other parking space keep drivers at a safe distance from one another, and signs caution browsers to maintain social distance and a limit of six at a time in front of the shelves. The three benches in front of the bookcases are turned upside down to prevent lingering in the company of others, and everyone is expected to wear a mask.

My wife stood in front of the bookcase on one side, the space in front of the middle case was open, and three men stood together on the opposite end of the display. In her telling, there was nothing out of the ordinary about the men – white, gray-haired, casually dressed, most likely senior citizens, and friends.

Then one man raised his voice and said, “I don’t know why you would vote for him. He’s an [expletive] disgrace to the office of president.” One of his companions responded as if making an attempt to remind the others and himself of an important life lesson, “My mother always told me never to talk about politics or religion.” The last member of the trio, to whom the initial comment was directed, remained silent, scanning the bookshelves and attempting to ignore the provocation.

The instigator continued, “Just because he [expletive] knows how to build golf courses and hotels, it doesn’t mean he knows how to [expletive] run the country.” As I listened to the story, I could picture this man turning red with anger, a human pressure cooker spewing jets of invective, returning to a momentary equilibrium, only to let off more steam when the pressure mounted.

The listener broke his silence, and with his gaze still fixed on the books in front of him, asked simply, “Are you done yet?”

“I like you,” the other replied, “but I just don’t see how you can support him. How can you look at yourself in the mirror every morning if you’re buying into what he stands for?”

At this point their companion added, “You have to stop this now, there’s a lady present.”

The lady was my wife, and she took this as her cue to end her browsing and come home with the story. Her experience that day at the town dump distills the essence of the challenges our country is facing. A pandemic that has already killed more than one million people world-wide and more than 200,000 Americans has left its mark on every aspect of daily life. That even includes what used to be a routine trip to the dump.

Now we wear masks and keep six feet apart, and public gatherings are limited in number even in front of the shelves for recycled books. Now too we are forced to balance the wish to express strongly held political opinions with the fear of damaging our relationships with the people we love.

We have seen this balance tip both ways, toward protecting the relationship by mutually agreeing not to discuss politics and toward the kind of free expression on display at the dump that can imperil our connections to others. It happens between friends, family members, co-workers, classmates, and even marriage partners. Sometimes the relationships survive free and open exchanges, but that takes commitment, tact, and the ability to maintain respect and civility in an increasingly polarized and divisive political climate.

Because I am a psychologist, when I picture the dump tableau, I imagine the scene as a projective test. Make up a story about this picture. Three masked men talking at the down dump, their voices raised as if arguing, shelves crammed with books in front of them. They are arguing about the state of the country in a time of pandemic and trying to remain friends. But this is not someone’s response to an ambiguous picture. It is the way we live now. As for the three men and the rest of us, we can only hope that friendship prevails.