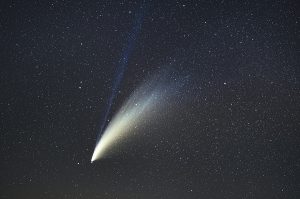 There’s nothing like the appearance of a bright comet to remind us that beautiful surprises are always possible no matter what else is happening in the world. I had seen four of these celestial visitors over the years, Comets West, Halley, Hyakutake, and Hale-Bopp, and this summer of the corona virus brought the fifth, Comet NEOWISE.

In the past four months, NEOWISE increased in brightness as it made its closest approach to the sun and then began to dim as it swung around to the other side and started its return journey to the outer edge of the solar system.

The virus also increased in magnitude, but unlike the comet, its growth left a trail of suffering and death in its wake, and there is still little evidence that it is on its way back to where it came from.

The Covid pandemic has fragmented our lives, so that we no longer move easily into social encounters or between our daily activities. We move from one checkpoint to another, always stopping to assess the risk and take the necessary precautions before moving on to whatever comes next.

In the second week of July, what came next for me and my wife was seeing Comet NEOWISE, and when a comet calls, it’s easy to forget about risk.

I first learned of the new comet when it was only visible about an hour before sunrise. Four o’clock in the morning comes pretty early so I decided to catch it on its way back in the evening sky. When the time came, my wife and I drove to a nearby schoolyard. We carried only two pairs of binoculars, a tripod, and a sense of anticipation shaped by memories of past comets and hopes for the new arrival.

We carried these things with us and within us, all in the service of answering the one question that we had come here to ask, “What would we see when we lifted our eyes above the treetops?”

Somewhere a half-formed memory of a young married couple looking up at Comet West in 1976 did its work to prepare us for our next step forward. Before dawn on a late winter morning, we stood on our front lawn, transfixed by the sight of a picture book comet that seemed to fill the sky.

Comet West was one of the brightest comets ever observed, but its visit was brief and its arrival largely unheralded. The media, burned by the disappointing show of the much-hyped Comet Kohoutek in 1973, did not want to make the same mistake twice.

Would the new comet be more like Comet West or the renowned Comet Halley whose return in 1986 saw us gathered on a hilltop with our neighbors, straining to see what was no more than a gray smudge on the horizon?

In 1996, Comet Hyakutake graced the evening sky and comforted me as I traveled to visit my father who lay critically ill in a hospital more than 200 miles away. Just one year later, in April 1997, Hale-Bopp rounded the sun and flared into one of the brightest comets of the century while also setting a record by remaining visible to the naked eye for 18 months. You could see this comet from almost everywhere, from the bright streets of Manhattan to the schoolyard where we were going now to keep our date with the newly discovered Comet NEOWISE.

Our observing site was a field encompassing two baseball diamonds. A plank bridge connected it to acres of conservation land on the other side of a small stream. It was here that I had photographed Comet Hale-Bopp in all of its brilliance and fine detail 24 years ago. We parked under a clear sky and walked out onto the baseball field. Security lights on the school building obscured the fainter stars, but the Big Dipper stood out, stitched in silver into the fabric of the night. The handle curved above us in the northwest, and we looked for the comet below its arc, just above the trees. We saw nothing. The trees were too close.

The comet was floating somewhere behind a blanket of green. By the light of a smartphone, we picked our way across the bridge into the conservation land, but once again, more trees blocked our line of sight. Back in the car, we drove through the warren of neighboring streets looking for a gap in the foliage, our own quest for a northwest passage that would channel the light of a comet into our hungry eyes.

What we saw was a solitary figure standing behind a tripod that held a camera with a telephoto lens aimed across a field into a slot between distant trees. We parked and approached, asking if he had found the comet. The man pointed into the distance, and we sighted along the barrel of his lens. Unaided, our eyes picked out a fuzzy blur, but the binoculars revealed a bright comet with a well-defined head and a long tail. Setting behind the trees, the comet seemed to be diving headfirst off the edge of the earth.

The photographer showed us some of the pictures he had taken earlier in the evening—spectacular shots that recalled the best comets I had ever seen in person or in photographs. The comet was leaving us for now and it was time to go. The man said good night and one more thing. With the camaraderie of strangers connected only by the impulse to search for traces of beauty in the dark, he said that if it were not for the virus, he would shake hands. Up to now, we had been running on comet time, but with his remark, we snapped back into Eastern Daylight and remembered where we were.

One Response to Running on comet time