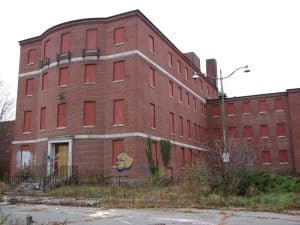 The Gaebler Children’s Center in Waltham, Mass., was a psychiatric hospital for severely mentally ill children and adolescents. (Photo courtesy of Wikipedia.)

When our editor asked if I might have something to say about residential schools for this special edition of NEPSY, I thought I was too far removed from any real-life experience of treating children in residential settings to make a relevant contribution.

Then I remembered a nine-month period when I worked at the William C. Gaebler Children’s Unit of Metropolitan State Hospital in Waltham, Massachusetts and the valuable lessons I learned in that short period of time.

The hospital had already been closed as part of the state’s plan to privatize the delivery of inpatient mental health services, and the fate of the Gaebler Children’s Center remained undecided when I arrived, a refugee from the recently closed Solomon Carter Fuller adult inpatient unit in Boston.

I had been at the adult unit for just under a year after privatization claimed Fuller’s outpatient clinic where I had spent the prior 12 years working with children and families.

The wave of privatization and hospital closures that overtook the state in the early 1990s sent patients to unfamiliar facilities, disrupted longstanding therapeutic relationships, and scattered the Department of Mental Health’s service providers to the few remaining outposts of state-operated care.

My outpost was Gaebler, a red brick building sitting at the crest of a long hill almost directly across from the Walter E. Fernald State School where I once had a summer job as a research assistant during my undergraduate days.

Now, after more than two decades, I was back in my old neighborhood, moving into the house across the street, a house with a rich history and an uncertain future.

My first impression of Gaebler was the spirit of community or maybe even family that pervaded every level of the network of relationships that held the school together. Administration, clinical staff, teachers, clerical, cafeteria, and maintenance workers knew one another well and knew the children entrusted to their care. They fought hard to keep Gaebler open and when that proved impossible, they worked together to ensure that the children made smooth transitions to carefully chosen treatment facilities.

Many of these kids had suffered violence and neglect in addition to serious developmental and psychiatric challenges. All of them needed the kind of long term compassionate care that the Gaebler staff were so good at providing. With Gaebler’s closing assured, they would have to get that care elsewhere.

Goodbyes are hard under any circumstances, and so when children were discharged from Gaebler, they left with “good-bye” books of messages from staff and friends to help them move on to the future while holding on to what was best about the past. These books were especially important when the center closed, and taking a cue from what we did for the kids, we made one for ourselves.

We chronicled the history of Gaebler with newspaper clippings, official memos, writings, and drawings by the children through the years and our own stories and reflections on the Gaebler experience.

As the newest member of the staff of a facility that closed nine months after I arrived, I didn’t have a lot of Gaebler stories to contribute, but there was one in particular that stands out even now, 30 years after I shared lunch with a troubled boy and a hungry crow in the waning days of an institution that had become a home for them both. I wrote about it in my first “In Person” column for this publication in March of 1993, and it bears retelling here because of the valuable lessons it has to teach.

The boy was an unpredictable youth with a predictably troubled past. The crow was one of the standard issue, winged omnivores that made their nests in the trees around Gaebler. The boy had just been transferred to me by his last therapist who was moving to another facility with a brighter future, and we began our work together by meeting outside at a picnic table for lunch. After a while, the boy wandered away from the table and, leaving our lunches behind, I followed him.

Suddenly the air was shattered by a loud “thwack” and we turned to see one of Gaebler’s enormous crows soaring up from the ruins of a broken Styrofoam box with half of a steak sandwich dangling from its beak. My patient knew instantly that it was my lunch and not his that had been spirited away, and he charged the fleeing bird with great anger and energy, swearing, threatening, and demanding that the startled intruder return his therapist’s lunch. The other half of the sandwich lay in what was left of its broken container, and I wisely decided to discard it. With a deeper wisdom, my new friend suggested that we feed the rest of the sandwich to the crow.

And so we stood there side by side on a bright day in June, a man and a boy by a picnic table on a hilltop, trying to charm a crow back to what was left of a stolen meal. We talked about the importance of earning trust by keeping our distance and not coming on so strong as to frighten the bird into staying away for good. We discussed how animals and people try to get what they need in life by asking or begging others to feed them or relying on themselves to work or sometimes to steal.

The crow did not disappoint us, and as we stood around the corner of the building carrying on our conversation, the bird returned to make short work of the rest of my lunch. Our first therapy session was over, and, as I had hoped, my patient had begun to join me in considering some of the troubling issues that had led him to Gaebler.

Even if it had been in my power to do so, I couldn’t have written a better script for that first meeting. Three months later in September of 1992, Gaebler closed and the children and staff scattered to places where they would have never intended to go. My patient was transferred to a privatized unit in another hospital where, I was told, he made a good transition and was managing to remain stable.

I moved on to Westborough State Hospital where I often took advantage of its rural setting to leave the office with my patients and walk together through the surrounding woods and fields, observing nature and the openings she offered into productive conversations.

In the end at Gaebler, only the crows survived, yet I wouldn’t say they had the last laugh. I would rather put my money on those of us who learned from the Gaebler experience to hope for the unexpected flutter of wings and to be ready for whatever might fall from the sky.