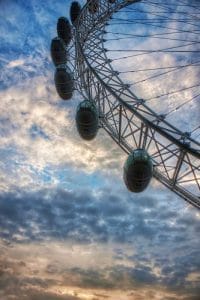 Tucked between the pages of a thin, spiral notebook with a plain brown cover, I keep two letters that came to me from London in the summer of 1970 after my first year of graduate studies in psychology.

In the small, cluttered room where I write at the top of the stairs, I know exactly where to find this book though I rarely open it. It is enough to know it is there to remind me of a time when the world was new and psychology held the promise that drives all explorers to ever-expanding horizons.

It is the age-old promise of adventure and discovery that beckons you forward when you stand on the threshold of delights you can only imagine. You are in love with the world and, for the first time, begin to think that it just might love you back.

Loving the world is too big a task, so I started with a city. It is impossible to say when my love affair with London began, but it was certainly long before I arrived in Victoria Station on the bus from Heathrow and squeezed into a telephone box to search the directory for one night’s lodging.

One night was all I would need because early the next morning I would take the Southern Railway to Wandsworth Common and walk to the Beechcroft School. There, I would work and live with 50 so-called “maladjusted boys” who, for all the usual reasons, were having trouble learning in regular classrooms.

I would have a small, clean room in one of the dormitories, meals, and tea breaks each day with the boys and staff, a caseload of several new boys to assess and treat, supervision by a psychologist from the Hampstead Child Therapy Course and Clinic, an invitation to hear Anna Freud discuss case presentations every Wednesday, and easy access to one of the most exciting cities in the world.

All of this was available to me for a mere three pounds, seven shillings, and eight pence per week or about $4.40 at today’s exchange rate.

I owe my good fortune to Dr. Murray Cohen, now a professor emeritus at Boston University, and Dr. Tom Lopez, a graduate of the BU program who at the time was doing postdoctoral work in London in Miss Freud’s program.

After completing our first year of doctoral studies at BU, we were required to have a summer placement and given help arranging one. When I made what was for me an unusually bold request to work in London, Dr. Cohen called Tom and Tom made the necessary arrangements.

Then, a letter arrived from Reg Evans, the headmaster of the Beechcroft School, spelling out the terms of my placement. This letter was followed by a second one from a Mrs. C.S. Thurtle inviting me to the weekly case conferences at the Hampstead clinic.

The other day, I picked up the notebook and examined the memories it holds. Along with the letters, typed on small, rectangular sheets of paper, were my notes on three case presentations. Miss Freud was always the discussant and I always highlighted her comments in my carefully transcribed notes.

My memory brought me back to the stately brick building in Hampstead with its exterior white trim, the vestibule leading to a grand staircase, and, somewhere, a conference room where I sat in a back row, craning my neck to see Miss Freud.

She was a pioneer in the field of ego psychology who just happened to be the daughter of the founder of psychoanalysis. As seen from the back row, she was a diminutive physical presence whose slight frame stood in sharp contrast to her towering intellect and ability to express even the most complex ideas in clear, understandable terms.

To a 22-year-old psychology student, Miss Freud was old and wise. Now, only a few years younger than she was then, I realize she was just wise.

Other memories spill from my notebook on sheets or scraps of paper.

There is a mimeographed sheet in faded purple with the schedule of the Beechcroft Open Day with gymnastics demonstrations and two songs to “celebrate the American Day of Independence.”

On a page torn from a stenographer’s tablet, a nine-question intelligence test created by one of the boys I was assessing reminds me that turnabout is fair play. He concluded that I was “slightly below average” but offered hope in his written comments, “Alan can be quite clever when he wants to be.”

Another scrap with a note to myself shows that I was at least clever enough to learn that tic-tac-toe is really naughts and crosses.

Sometimes, a walk down memory lane invites us to walk the actual lane and see what has become of a place we once loved. I did that twice and, just recently, made a virtual stroll through the magic of Google street view.

A lot has changed in 50 years, but Wandsworth Common is still three stops from Victoria Station on the Southern line. You can still follow Belle Vue Road between colorful shops on your left and the broad, green common on your right. Cross Trinity Road and Burntwood Lane will bring you to Beechcroft Road and the corner where the school once stood.

Headmaster Evans with his pet mynah bird, the teachers and the boys who welcomed me have all moved on, but they are not gone. They are there in a deep interior space where we carry all the good people and experiences that have made us who we are. It is a place of silence and gratitude that can come to life with the simple act of opening a thin spiral notebook and discovering what’s inside.