Bridging the divide: Walking the talk 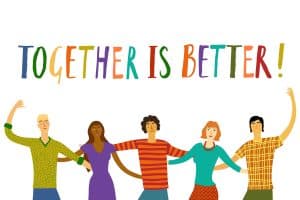 Last month, my reflections on the passing of a friend on the other side of the culture wars divide led me to the importance of common ground and common sense in bridging the widening gap between progressives and conservatives.

In recent years, the gap has become a chasm that increasingly blocks honest and respectful conversation between people on opposite sides of hot button social and economic issues not just in the United States but throughout the world.

It is easy to find common ground with long-time friends, and common sense is a reliable guide to preserving a relationship by knowing when to speak and when to keep silent about issues likely to create dissension.

If our aim is to create a world where people can discuss important matters with open minds and respect for those who disagree, it would be nice to be able go about bridging our current divide one friend at a time.

It’s a good way to live life regardless of how the issues get resolved, but if we want to accelerate the process and enlarge the scope of our efforts to create conditions for productive dialogue, then we need to operate on a larger scale. A shared history with a close friend gives you a ready-made base, a neutral safety zone where you can linger as long as you want or return to after a heated discussion, venturing out again at a pace that experience teaches is tolerable for you both. Let the “other” be a stranger, and the base, while still there, becomes harder to find.

This was the point of a recent Op-Ed piece in the Boston Globe by Todd Washburn who presented evidence showing that since the middle of the last century, the American public has become more highly educated, more consistently liberal or conservative in their political beliefs, and more hostile and intolerant of people on the other side of the divide.

Washburn’s suggested remedy for the current state of affairs is to create ways to promote mutual understanding and build bridges of empathy between liberals and conservatives. According to Washburn, these connections might be forged through joint classroom activities mixing high school students from all walks of American society, compulsory national service or even military service. The aim is to break down the us vs. them mentality that sorts people into rival camps where the psychology of team membership takes hold and blocks mutual understanding and cooperation.

While the sorting process has been accelerated by social media’s creation of information silos where people can turn for confirmation of their biases, social psychologist Jonathan Haidt has marshalled evidence for earlier and more robust influences on the liberal/conservative divide. According to Haidt, nature and nurture work together to create our preferences for liberal or conservative philosophies.

Nature contributes at a genetic level by creating brains with more or less dopamine, serotonin and glutamate. Higher levels of dopamine have been found to correlate with openness to experience and sensation seeking, two traits found more often in people with liberal ideologies.

Conservatives tend to be more risk averse, and their brains have higher levels of serotonin and glutamate, two chemicals positively correlated with threat sensitivity. Add to this the contribution of nurture in the form of differences in social learning, life experience, ways of adapting to the environment, and the story about our lives that we

make from all of this, and you have a pretty good template to help you understand if not to predict one’s preference for liberalism or conservativism.

Now connect one’s personal narrative with the grand narratives of our political parties and you might even be able to guess one’s party affiliation. Just be sure to adjust for the correspondence of important elements of that person’s identity with the brand image of the party. The stronger party affiliation, the more likely the individual will demonize the opposition, and in a society that seems to have lost its respect for civil discourse, it is no wonder that we have lost the ability to work together toward common goals.

So where do we go from here? The challenge is enormous, but just because we are working against forces of nature and nurture that seem determined to keep us apart, that is no reason to abandon our efforts to find the common ground that will keep us together.

It is in this spirit that I offer the following suggestions for bridging the divide and encourage you to come up with your own. These ideas have come from discussions with colleagues and friends, from my own reflections, and from reading in the area, especially Jonathan Haidt’s “The Righteous Mind: Why Good People are Divided by Politics and Religion,” Ezra Klein’s “Why We’re Polarized,” and the material available on the website www.moreincommon.com.

1. Know thyself. Be aware of the identities and prejudices that define us. Decide which issues we want to emphasize. Find identities that we share with people across the divide and build bridges of empathy and understanding. Rediscover the virtues of forgiveness, good-faith debate and even irreverent humor.

2. Spend time with people on the other side of the divide. Find areas of common interest to discuss and/or mutually enjoyable activities to share (e.g. the wish to protect our children, build a better society, hobbies, travel, etc.). If you move into hot-button issues, identify areas of agreement, acknowledge areas of disagreement, be respectful, don’t expect to change the other’s mind, know when to stop, maintain a positive relationship. Remember that, when someone says something we find provocative, they may be expressing a sense of hurt or injustice that they need to have heard and understood.

3. Rediscover a politics of place. Politics doesn’t always have to be national. On some issues there may be better scope for constructive dialogue or action on the local level.

4. Remember that, in culture wars, there are no solutions or victories, only corrections. Consider how far we’ve come and know that meaningful change is slow, incremental, and not linear.

5. Challenge those who use negative labels to attack other people’s views or behavior. Avoid caricatures that exaggerate differences and portray those who disagree as totally “other.” Avoid and object to the use of words like “fascist,” “woke” and “snowflake.” Remember that human rights are not absolutes; my rights impinge on the rights of others and therefore need to be balanced against them.

6. Keep the facts in perspective. The media thrive on “outrage” stories, e.g., that universities are cancelling speeches daily. Keep in mind that events like these are rare enough to justify printing as “news.”

7. Support those who are working against polemical echo-chamber politics. An excellent source for information about efforts in this regard is the US/European website More in Common, devoted to “uniting divided societies” by correcting caricatures with facts.

8. Finally, remember the wisdom of Gandhi and “be the change you want to see in the world” or, in common parlance, “walk the talk.” If we want a more inclusive and civil society, we have to be more open-minded, tolerant and respectful in our dealings with those with whom we disagree. We also need to use common sense and discernment to know when, where and with whom to have the kind of conversations that can lead to a productive interchange of ideas. It won’t do much good to confront extremists on either side of our great divide, but most people are somewhere in the middle and in the end, it’s not what we say, but who we are and the kind of example we set.