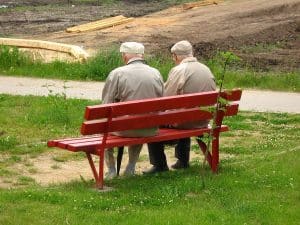 Our friend Jim died this summer. He was my friend, but I use the word “our” because we were six, friends since high school, who have managed to stay in touch through all the seasons of our lives, most recently by way of twice monthly video chats.

Now we are five. When I tell people about our group, they usually respond by saying something about how rare it is to maintain such a close-knit group over so many years. Rare and wonderful. I have to agree, and Jim’s death has got me wondering how we did it but, more specifically in this age of incivility and polarization, how we managed the differences among us without fracturing the sphere of our friendship.

I am not so naïve to think that the answer to this question will tell us how to heal the wounds of our polarized society, but it might be enough to remind us of the power of finding common ground and using common sense.

Politicians like to use the word “war” to describe all-out efforts to eliminate a significant threat to the well-being of our society. First, there was President Johnson’s war on poverty, followed in short order by Nixon’s war on drugs, both of which continued while we fought real wars with hostile foreign powers.

Now we are engaged as never before in a different kind of war, a culture war that pits citizens with progressive and conservative philosophies against one another and widens the gap between us to the point where pundits are beginning to warn of the possibility of armed conflict.

On a global scale, culture wars have always been with us. Wars of religion raged across Europe and the Middle East, and in our own country, clashes in the cultures of the North and South erupted in the Civil War.

Culture wars are nothing new, but what makes their current appearance unprecedented is the role of the Internet and social media in amplifying our disagreements by providing information silos that feed extreme points of view, impede a fair hearing of both sides of a question and legitimize the demonization of those who disagree.

Add to this mix politicians who use these outlets to spread lies designed to keep them in power and you have a country where nearly half the population do not believe the sitting president was fairly elected despite no evidence of widespread voter fraud.

Jim was a conservative though, in our eyes, he was much more than that. He was our friend, the audio-visual guy who did the photography for our high school newspaper and started a recording company with a kid named Marty from a rival school. They called it PhotoSonics and, for $100 (in those days, the cost of our high school’s annual tuition), sold us each a share that wasn’t really a share at all. It was a loan to get the company off the ground, and the certificate that we got in return was a fancy IOU that I still have somewhere in one of my desk drawers.

PhotoSonics did some recording of up-and-coming rock bands and once made a promotional video for the local Boy Scout Council. I did the narration in Marty’s basement recording studio, a pretty impressive set up for two high school kids.

Jim was kind and curious about the world and loved introducing his friends to new ideas. He took an early interest in hypnotism and demonstrated his skill at one of the Saturday night parties that another friend hosted in his parents’ basement.

When Jim had sat his subject down on a stool and was about to begin, our host turned off the record player, and we all gathered around to watch Jim work his magic. I don’t recall what he used to focus the subject’s attention, but when the kid came out of his trance, he was primed to start conducting a symphony orchestra as soon as he heard a certain word.

Jim spoke the word and kid began waving an invisible baton to the tune of an inaudible soundtrack. A different word ended the performance and the kid went back to whatever he was doing before it was spoken. Often, it seemed like Jim brought him back just in time to prevent a stroke, so fast was he waving his baton with his gaze narrowed and sweat dripping from his scrunched brow. When Jim put him under again to remove the post-hypnotic suggestion, the kid came around with no memory of what had happened.
Of course, we wondered if the subject was a plant whom Jim had coached to build his reputation as the reincarnation of the Great Kreskin. We wondered, but that didn’t stop us from believing.

Jim became a computer engineer, married, and raised two daughters. He was a licensed ham radio operator and participated in emergency drills with other enthusiasts. We never talked about what kinds of emergencies they were preparing to handle, but arranged our twice monthly Zoom meetings to accommodate Jim’s schedule. We started meeting this way when COVID halted our in-person reunions, and we valued the opportunity to get together any way we could.

Jim’s politics were to the right of the rest of ours, and that became apparent in his off-handed comments about the 2020 presidential candidates and hot button issues like gun control and immigration. And so, we avoided politics and talked instead about our daily lives, the challenges of growing older and some of the adventures we had shared in our 60-year friendship. Jim was dying and we all knew it. He had always been forthright about that, and it didn’t stop him from sharing a laugh, demonstrating a card trick, or filling his little Zoom window with funny icons for our amusement. He was still the old Jim that we knew so well.

When the presidential election results were first announced, an email went around our group suggesting we celebrate Mr. Biden’s victory at our next meeting. Jim responded that he wouldn’t be able to attend because he had a prior engagement, but it was clear that he wanted no part in celebrating the election of the other party’s candidate. Jim was just too much of a gentleman to tell us that directly. And once we realized our mistake, we made a point of telling him that there were more important things to celebrate than an election victory. We would meet, as we always did, to celebrate our friendship, and we hoped he could arrange his schedule to join us.

Jim was there at our next meeting and for most of the meetings after that until his failing health made it impossible for him to attend. We used that time together to enjoy each other’s company. With a culture war between conservatives and progressives raging in the society around us, we existed in a neutral zone of our own making, a space filled with good fellowship, an honest acknowledgement of our differences, and a shared conviction that those differences weren’t nearly as important as all that we had in common.

Common ground as the key to bridging the divide – it’s a simple insight, so obvious but so often overlooked, yet when a relationship matters more than being “right” about the issues, we appreciate our common ground more than ever. The relationship survives, even thrives, when each partner approaches the other with the kind of respect and affection that arises from a shared history. In that kind of atmosphere, the issues take care of themselves and, when they don’t, there is always common sense and the wisdom of knowing when to speak and when to keep silent.

The picture becomes more complicated when there are no bonds of friendship to offset the antipathy that can arise in culture wars encounters. Next month’s column will consider some of the challenges inherent in trying to bridge the divide in our larger, pluralistic society where goodwill and a spirit of cooperation cannot be taken for granted.a