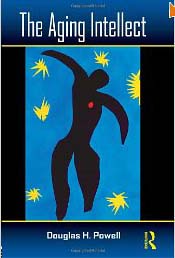 At a friend’s recent 60th birthday party, I was struck by the sheer volume of jokes about the indignities of aging, especially one-liners about the loss of cognitive functioning.

Hearing so many wisecracks about ‘senior moments,’ I felt I’d stumbled upon a hidden aspect of the boomer zeitgeist. Concealed beneath the generational focus on age-defying lifestyles, we baby boomers seem to harbor enormous anxieties about losing our minds. As we extend our life spans through healthy living, we sense a growing vulnerability to cognitive impairment with each passing birthday.

Harvard psychologist Douglas Powell asserts in an important new book that individuals are not powerless in the face of these anxieties. In fact, he cites extensive evidence to show that one can minimize the risk of intellectual decline and improve one’s quality of life by making one or more relatively small changes in daily habits.

Powell is well-positioned to make such claims, having taught at Harvard’s Graduate School of Education and School of Public Health, practiced clinically at Harvard University Health Services, published research on cognitive functioning in aging populations, and co-authored MicroCog, a computerized neuropsychological assessment instrument.

Studying people between the ages of 60 and 80 living independently, a group the author terms “3rd Agers,” Powell categorizes them into three levels of intellectual functioning. Optimal cognitive agers (20-30 percent of the population) tend to have high levels of energy and activity, are attentive to their health and appearance and are open to new experiences. Some but not all of these optimal agers are well-educated; many have worked in ordinary jobs. All of them display an unmistakable mental vigor, even though some may be physically disabled.

Normal cognitive agers comprise the midrange of the group (50-60 percent), have moderate energy levels and are somewhat resigned to the loss of cognitive function. High risk cognitive agers (10-20 percent) tend to have low energy levels, are more prone to depression, and often resist acknowledging medical problems until forced to do so.

The author offers helpful, specific, evidence-based recommendations keyed to each subgroup of the 3rd Age population. Among his findings: exercise and healthy eating help slow cognitive decline and lower the risk for dementia. Alarmingly, adults with obesity are three times more likely to become demented than those of normal weight. Even small behavior changes can make a big difference, especially for those in the high risk group. For example, inactive elders who volunteer just once a week in their community increase the probability of maintaining their mental capacities by 24 percent.

As Powell points out, much is not yet understood: research can account for only 30 percent of the factors that contribute to optimal cognitive aging. What could account for the other 70 percent? Powell does not speculate, but I would imagine that variables such as financial status, racism, social classism and trauma history could explain individual differences in aging. The book would have been strengthened by at least a brief consideration of these critical factors.

The book’s intended audience includes professionals, caregivers, and 3rd Agers who realize they are not aging optimally and want to do something about it. Accessible yet thorough, “The Aging Intellect” is a marvelous resource for boomers and non-boomers alike.

Paul Efthim, Ph.D. is a licensed psychologist in private practice in Brookline, Mass. and holds a faculty appointment at the Boston Institute for Psychotherapy.

Learn more about the book: The Aging Intellect

Posted in Book Reviews | No Comments »