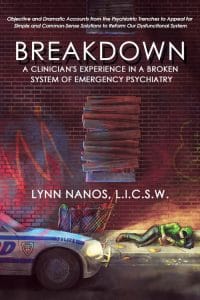 There is no such thing as a perfect system and in the case of the mentally ill, nothing could be truer. People with mental illness face an uphill battle to secure appropriate services, avoid being caught up in the criminal justice system, and most of all, steer clear of the revolving door that has become our mental health system.

Lynn Nanos, a mobile emergency psychiatric clinician, believes it is time for a change. Her book, Breakdown: A Clinicians Experience in a Broken System of Emergency Psychiatry reads like a clarion call to all involved in mental health care in this country.

Drawing on her rich experience, Nanos highlights the epic failures of a system that was designed, after all, to help and not hinder.

“One factor that has contributed to the decrease in length of stays on inpatient units and the elimination of inpatient beds over the last several years is the lack of adequate reimbursement to hospitals by health insurance companies — private and public,” writes Nanos.

While the purpose of inpatient treatment is to reduce the risk of harm to and by the patient, crisis units occupy a need somewhere in between — where the patient is not safe to return home yet doesn’t meet the criteria for admission to an inpatient setting.

Nanos explains, “Although the crisis unit is staffed continuously, it is significantly less supervised and structured than an inpatient unit.”

However, as a society we often hesitate to acknowledge both the prevalence and the danger of the mentally ill. Nanos writes, “The government should have an ethical, legal, and moral obligation to care for its people. It is stunning to realize that the National Institute of Mental Health (NIMH) refused to acknowledge the existence of up to two million schizophrenic people.”

Mentally ill patients are also often released only to quickly be readmitted. Nanos describes the experience of Farron, who spent much of his early life revolving through inpatient settings.

She writes, “When I send a patient to the hospital emergency department and the patient is released on the same day rather than moved to an inpatient unit as I expect — the system is broken.”

With the increase in concern for the rights of people with mental illness and the passing of the Lanterman-Petris-Short Act in 1967, which severely restricted the criteria for which people could be involuntarily admitted to inpatient units, many mentally ill people were simply released onto the street.

In 2016, for example, Nanos points to the less than 38,000 state inpatient beds while some 8.1 million people were estimated to be seriously mentally ill. Nanos believes this is most likely because of the right of patients to be free being placed above the right of those closest to them to be protected from harm.

“Those patients who suffer the most are those who are most impaired and who are unaware that they are ill and need treatment,” writes Nanos.

To that end, Nanos suggests that the autonomy of patients should not always be the guiding feature of a clinician’s treatment plan. One example is in the case of patients with psychosis.

Not only is a patient less likely to understand the ramifications of his diagnosis, but he may also lack the ability to navigate the treatment system.

“There is a link between violence, untreated serious mental illness, and a lack of awareness of one’s own illness,” writes Nanos.

While in Massachusetts, health insurance companies are expected to assist emergency services programs in the search for inpatient beds, admission can be refused for a variety of reasons, everything from the expected stay extending beyond one week to arguments over the clinical necessity of admission.

Seriously mentally ill people need the help of a system that advocates for their needs — especially when they are not able to advocate for their own.

Nanos’ book is a treatise on the current mental health crisis. It offers a rich and often appalling view from the inside, exposing a failing mental health system that is at best overwhelmed and at worst, deeply misguided.