A review of the less talked about mood disorders 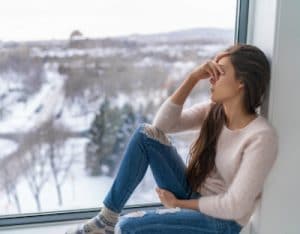 Depressive disorders represent an extremely broad, heterogeneous group of disorders. These clinical syndromes share some common symptoms (especially dysphoria) but, in fact, reflect a number of disorders that have diverse etiologies: characterological, acute reactive, and biologic.

The symptoms, course, prognosis, and response to treatment vary considerably depending on the particular type of depressive disorder seen clinically as well as a person’s genetic makeup and psychosocial circumstances. Below is a review of some of the less talked about mood disorders.

Organisms evolve in ways that promote adaptation to the environment. Examples of this, seen in numerous species (both plant and animal), are the biologic functions influenced by photic stimulation (i.e., exposure to sunlight). Many hormones and neurotransmitters exhibit diurnal variations and are powerfully influenced by environmental stimuli, especially photic stimulation.
The first five million years of human evolution took place in equatorial regions that experience a highly stable ratio of sunlight to darkness year-round (basically 12 hours of daylight, 12 hours of darkness). It was around these environmental stimuli that some fundamental biologic processes evolved and remain to this day.

About 150,000 years ago, humans migrated to other geographic regions where ­seasonal changes in patterns of light and dark were first encountered (the farther away from the equator, the more pronounced changes are evident). As the human organism had to adapt to new environmental circumstances, this likely set the stage for difficulties.

Apparently, many people manage this adaptation rather well, while others do not. Some of the more vulnerable people are hypothesized to suffer from seasonal affective disorder (SAD), a mood disorder that is ushered in by reduced exposure to bright light.

SAD is also seen in individuals who work at night (and sleep during the day), some 20 percent of the workforce, and in people who live in areas that experience significant cloud cover and/or air pollution.

SAD can present with a full range of depressive symptoms with intensities varying from mild states of dysphoria to severe, major depression. Interestingly, the majority of people with SAD have symptoms that resemble atypical depression; that is, appetite increase, weight gain, fatigue, and hypersomnia.

It is theorized that the basic underlying neurotransmitter dysfunction primarily involves serotonin, thus suggesting that if antidepressants are used to treat SAD, the drugs of choice are SSRIs or MAO inhibitors.

Additionally, high-intensity light therapy has been found effective in treating SAD. This treatment involves daily exposure to bright light (either by way of a commercially ­available light box that provides 10,000 lux of light, or by encouraging the patient to go outside without sunglasses for at least 20 minutes per day). High-intensity light therapy has also been shown to reduce all forms of depression, not just SAD.

This disorder is characterized by the tremendous regularity in the onset and remission of symptoms. Mood symptoms generally occur for only a few days beginning several days prior to menses. Generally, there are no psychosocial stressors (i.e., it is best seen as an endogenous disorder).

The limbic system contains estrogen receptors, and it is hypothesized that fluctuations seen in female hormones premenstrually may destabilize neurotransmitter functioning in key limbic areas. Clinical experience rather strongly supports the hypothesis that serotonin is the primary neurotransmitter underlying PMDD. The most effective pharmacological treatments ­currently available for PMDD are SSRIs.

Subtle mood changes are seen in the majority of new mothers. The so-called “baby blues” occur in 50 to 80 percent of women following childbirth. However, such changes are not pathological and do not exclusively involve sadness. These mood changes involve increased sensitivity to the whole range of emotions, including happiness. Such enhanced sensitivity may enable new mothers to be even more attuned to the nuances of their child’s emotions.

Postpartum depression is another story. It occurs in 10 percent of women and can have devastating effects. Generally, the onset is two to six weeks after delivery, and if left untreated, it may last from one to two years. Postpartum depressions are often severe and not only cause suffering for the woman but can also significantly interfere with crucial mother-child bonding.

Those most prone to postpartum depressions are women who also have experienced premenstrual dysphoric disorder and/or prior postpartum depressions. In addition, it is not rare that the stresses, the normal changes, and the sleep deprivation following delivery can precipitate a first episode of bipolar illness in a woman genetically predisposed to this disorder. Severe manias, obsessive-compulsive disorder, and psychoses may also develop following the birth of a child.

*This article is based on Dr. Moore’s latest book, “Handbook of Clinical Psychopharmacology for Therapists” published by New Harbinger Press and coauthored by John Preston, John O’Neal, and Mary Talaga.