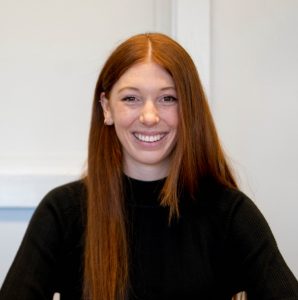 Based on this theory, they asked questions in a 10-item “Belief in Science” scale to determine how participants valued scientific information. They contacted more than 1,600 participants from Amazon’s Mechanical Turk, a crowdsourcing website that allows businesses to request on-demand tasks from a virtual workforce.

Because of the online platform, they were able to get responses from a broad range of people from across the country. While the group did not set out to prove what they already suspected, Stosic said it was valuable to have those beliefs substantiated.

“We did have an inclination that belief in science would have a connection to the willingness to wear a mask in public,” she explained. “It was our original hypothesis, so we kind of expected it but it’s still nice to have it confirmed.”

Demographically, Stosic acknowledged the majority of people who were anti-mask wearing were typically white conservative males. She said, in her opinion, celebrities, politicians, and business people who publicly talk about mask wearing could build more trust. But when prominent figures create distrust, it becomes a tough belief to change. So then, is society’s belief in science shrinking?

“It comes down to your belief in who you’re listening to and trusting.” --Morgan Stosic, University of Maine doctoral student

“Our data doesn’t really speak to whether or not there is a shrinking belief in science,” she said. “But my own intuition tells me that it is a shrinking group of people who actually believe in science and that’s basically due to political interference. Our country seems to be in a little bit of a low.”

She stated the more scientific data is openly talked about in public making it less of an unknown, the greater the chance people might believe in it. Ruben, who worked with Stosic and Helwig, highlighted public figures as a source for that disbelief, but also the media.

“I think there’s been a lot of misinformation in the media and by public figures and because the pandemic was so novel,” she said in an email. “There were uncertainties that may have impacted the public’s trust in science.” James Mahalik is a professor in the Department of Counseling, Developmental, and Educational Psychology at the Lynch School of Education and Human Development at Boston College.

In the Journal of Health Psychology, also in February, James Mahalik co-authored a study connecting men’s attitudes to mask wearing.

Mahalik is a professor in the Department of Counseling, Developmental, and Educational Psychology at the Lynch School of Education and Human Development at Boston College.

“If you’re not listening to scientists, then who are you listening to?” --James Mahalik, Ph.D., professor, Boston College

Stating in a research article about their findings, “masculinity, health beliefs, confidence in scientific experts, empathy toward the vulnerable, and political ideology may, when taken together, account for men’s attitudes toward mask-wearing.”

Mahalik initially suspected there was something tied to gender last August. While walking down the street, he saw a group of people approaching—a mix of men, women, and children. All of the women and children were wearing masks, yet none of the men were. He wondered if their attitudes toward mask wearing might be responsible.

The study started with all men, not just white conservatives, as a sample with confidence in science as a mediator. They found that the reluctance to wear a mask related to other health behaviors like a bad diet or not seeing a doctor.

He pointed out that “conformity to masculine norms” can be equated with risky behavior. The more traditionally socialized the men, the less likely they believed in science. Mahalik gave an example: a little boy scrapes his knee and starts to cry; his dad says big boys don’t cry. Those messages of masculinity are taught early—emotional control, self-reliance, throwing yourself into work. Men get praised for being in control and paying less attention to feelings.

Unsurprised by the results his team found, he was concerned about the public dialogue on mask wearing. The paradox, he said, is the more you push a particular message, the more people resist.

One strategy he suggested to offset that was in story telling or relational interventions. Making it personal can be far more effective. If you can get trusted community leaders to be a spokesperson, they might be more willing to take mask wearing seriously. He used the example of The Rock, the public persona of actor and former professional wrestler Dwayne Johnson.

“He made a public appeal about mask wearing,” said Mahalik. “If you’re a Rock fan, you might find that more significant. If you’re not listening to scientists, then who are you listening to? That’s the million dollar question.”

Stosic agreed. Where you get your information determines how much trust you have in science. “It comes down to your belief in who you’re listening to and trusting,” said Stosic. “It depends on the groups you’re in and the cultural practices that influence it.”