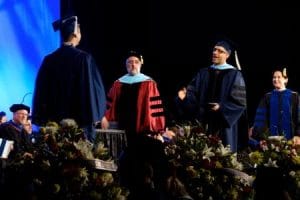 Interruptions in schooling can result in academic setbacks for students. For some students with disabilities, the COVID-19 related stoppage has been devastating. In an effort to ameliorate the situation, Edward F. Coppinger (D-10th Suffolk District) filed legislation to provide an additional year of education for students negatively impacted by the pandemic.

Coppinger’s proposed bill would enable any student scheduled to graduate at the end of the 2020-2021 or 2021-2022 academic year to opt in to an additional year of schooling, should it be determined that the student’s education has been negatively impacted by the pandemic.

Coppinger reported that a constituent with twins who have significant disabilities was concerned about their impending graduation in June. His children had missed 15 months of in-person learning and a remote model had proved to be an ineffective academic platform.

The bill is currently with the education committee, which has held a hearing and is doing due diligence, according to Coppinger. He added that intense discussions with the Massachusetts Department of Elementary and Secondary Education (DESE) have been taking place as well. “I have no idea when the bill will be presented for a vote,” he said. “The education committee has hundreds of bills to consider.”

Coppinger noted that this bill is optional for all students, although the focus is on special education students; the bill calls for the state to finance the extra year.

Carrie Lehmann, education director at the Stetson School, an affiliate of Seven Hills Foundation, cited the proposed bill as a good opportunity for special education students to finish their schooling and have closure after a disruptive academic year. “It was hard to do anything hands-on last year,” she said. “If a student is trying to get more life skills, they need to get as much training as possible.”

Stetson School is a residential facility and students were able, for the most part, to continue in-person learning. However, some students were forced to resort to virtual schooling when positive COVID cases arose, according to Lehmann. “Those who were remote had a much bigger lapse in participation. How many of these students felt defeated and hopeless? I wonder how many older teens got lost during the pandemic,” she said.

“School is a responsibility we have to do for all students,” Lehmann said, adding that financial consideration or capacity should not be a factor that deters or prevents students from receiving an education.

Lehmann said that Stetson’s population would most likely opt to remain in school for the extra year if the legislation passes. “Otherwise, they would have nowhere to go, nowhere to live. DCF provides a lot of support. But if they sign out, they no longer have that support,” she said.

Michael W. Ames, Ph.D, president/CEO of the RFKCA (Community Alliance) formerly the Robert F. Kennedy Children’s Action Corps and the Dr. Franklin Perkins School, reported that “…students with learning challenges have been particularly hampered by the pandemic.” He noted, however, that the need for additional academic support differs by experience.

Residential students continued their education and wouldn’t need what a public school student in in a remote or hybrid model will need, according to Ames. “There’s an important distinction. But in terms of the legislation concept, adding a year could be a difference maker for students unable to learn or engage in a virtual format.”

Ames pointed out that schools must do right by students, but if students remain longer, entry for incoming students will be delayed. He cited the dearth of special education teachers as another potential challenge to successfully implementing the legislation.

“This legislation would help the whole person, both mentally and educationally,” said Coppinger.