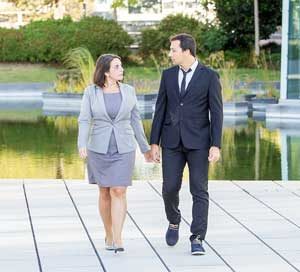 When he was finally given permission to walk outside of the locked areas of the hospital with staff supervision, the man wasted no time in arranging opportunities to walk with his psychiatrist, to work in the hospital greenhouse, and to spend some of his weekly therapy hour with me in the open air.

There is nothing new about walking during psychotherapy sessions. It was a common practice for Sigmund Freud to walk with his patients around the University in Vienna.

The walks helped his patients clear their minds and speak more freely than they could have done in the office. They became such a routine feature of Freud’s psychotherapy sessions that they became known as “Freudian Walks.”

In this spirit, when the World Council for Psychotherapy convenes in Vienna for its World Congress in 2023, it will include small groups of people walking and talking about different topics.

I can imagine the sage Doctor Freud lighting a cigar and nodding in appreciation at this tribute to something he must have regarded as a perfectly natural and logical combination of human activities.

My patient neither knew nor cared what the founder of psychoanalysis thought about walking during psychotherapy. He just wanted to get on with it, and so, one bright spring day with a winter chill still in the air, we set out on a circuit of the building where he had spent the last decade of his life.

I have been walking with patients since I began doing psychotherapy with children during my postdoctoral training. We walked in the open fields of state hospitals where we encountered other walkers and once a hungry crow that swooped down to steal one of the sandwiches we had laid on a picnic table for lunch.

Walking provided life lessons in how to greet fellow walkers, what to do when your lunch gets stolen, and why one of nature’s creatures would choose you of all people to burgle out of a tasty meal.

In hospitals for adults with serious problems that often required years of treatment, we walked to escape the confinement of concrete walls and locked doors. We walked to see the different buildings where one patient had lived, each one allowing him more or less freedom of movement, the arc they traced telling the story of the victories and defeats in his battle with mental illness.

We walked together, a blind man holding my arm and then telling me to shut my eyes so I might know how it felt to be him. We walked clockwise around a loop encircling a wood framed house that was once the home of  hospital superintendents. Now it served as a residence for people learning the skills they would need after they were discharged.

Then, when my patient didn’t feel any better, we walked counterclockwise. For a time, too a long a time, we walked so a patient could smoke when cigarettes were banned inside hospital buildings.

In all of these walks, the natural world, the built environment, and the people we met along the way provided the stimuli that our perception sorted, avoided, magnified, or distorted to create the reality that each of us experienced in his own particular way.

An airplane reflecting sunlight high overhead might have passed unnoticed by me if it had not prompted my patient to tell me about the flying lessons he once took when he was young, well, and still full of hope for the future. A rainstorm became an opportunity for another man to accept a share of my umbrella at time when he was just beginning to take the risk of asking others for help.

Cognitive scientist Alexandra Horowitz took a walk around her familiar city block with 11 different experts and chronicled what she learned in her book, “On Looking: Eleven Walks with Expert Eyes.” Her toddler, an artist, a geologist, a typographer, one expert after another opened the author’s mind to the city block that she knew so well, but only through the filter of her own interests, routines, and selective attention.

What would my patient teach me that I had never learned or forgotten as we set out to circumnavigate the hospital grounds? He was all energy and enthusiasm as he almost trotted through the open doors, setting a quick pace as if to fill a shopping cart with experiences before the store closed for the night.

The building where he was first admitted was falling to a wrecking ball, and I remarked that he was probably not sad to see the end of a place full of so many bad memories. At another time, another place, and with a different person, it might have been the kind of remark that would have moved our discussion toward the meaning of recovery and the challenge of staying well.

The man looked back with a smile and chided me for not keeping up. He pointed to the distant hills that until now he had only seen through the windows of his locked unit and said he hoped one day to encounter one of the deer that sometimes strayed to the edge of the woods at twilight.

He hoped for other things too, but hope was new for him, and he walked now to savor what he had missed. Something new was coming to life, and he did not need my words to make it happen.